You might recall that in my last episode of “Who’s Paying for Health Advances?” I made brief mention of a drug used to treat respiratory syncytial virus (RSV) in children with chronic lung disease.

RSV is a seasonal disorder that causes significant disease (what doctors call “morbidity”) in children, especially premature infants who have grown into children with congenital heart disease and chronic lung disease. (“Congenital” means “occurring at birth” and “chronic” means “happening all the time”.)

RSV is around all the time. In healthy individuals, it causes nothing more severe than a common cold. However, in unhealthy people (like children with lung disease), it can cause the lungs to fill with mucus and fluid (severe pneumonia), even death.

Remember from the earlier article that the immune system uses two strategies to fight invaders. One strategy is to spit out a specialized protein called an antibody which binds to the invader and tags it for destruction (if it’s a bacteria) or simply gums up its ability to cause disease (if it’s a virus).

Antibodies made by pharmaceutical companies are in a new class of drugs called “biologicals” or “biologics”. It’s easy to spot the ones that are antibody molecules: the abbreviation for antibodies is “Ab” and so these drug names end in “-ab”. For example, antibodies against RSV are called palivizumab and are sold under the brand name Synagis™ by the drug company MedImmune, now part of the giant pharmaceutical company AstraZeneca. 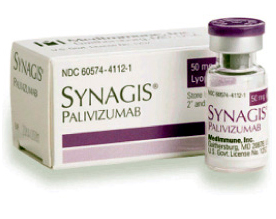 Palivizumab has been shown to be remarkably safe (causing almost no side effects or adverse reactions) and reasonably effective (reducing the incidence of RSV infections in susceptible persons to about half of what would be expected without use of the drug during a typical winter season). It sounds like a win-win situation. What’s the problem?

Synagis™ must be given monthly during the season; the length of the RSV season varies by location but is typically four to six months. Each monthly treatment has a cost of $1500 to $2000 for an annual cost of about $9000 per patient. The wholesale price of Synagis™ is $1416.48 for a single-dose 100 mg vial that will treat a 15-pound child. No one knows what it costs MedImmune/AstraZeneca to make that 100 mg, or how much of their research and development costs are being recovered with this drug. That’s of course a trade secret.

If I were an insurance company, I would make sure that I removed any parents with premature infants from my policyholder list, because my business would be to maximize profits, and laying out close to $100K for Synagis™ treatments will break the bank if I have too many of those patients on my rolls. At present, insurance companies will typically reject any claims for Synagis™ treatments, despite their proven effectiveness. This is just good business practice. It’s good parenting to resist this good business practice, so my Twit-friend Dr. Jen Gunter has a website designed to give advice on how to write an appeal letter to your insurance company.

Cases like these are the root problem of health care reform legislation. Somehow, the pool of patients needs to be large enough to spread a financial risk as broadly as possible. For example, imagine working for a company with 10 employees, one of whom has two children who are susceptible to RSV infection. A well-run insurance company will either drop this employer, or raise rates to the point where the employer can no longer afford to pay the premiums.

Roughly a half-million babies per year in the US alone are born prematurely, and virtually all of these will benefit from RSV prophylaxis.

What is to be done for this? Do we ration healthcare by forcing parents to write appeal letters? What about parents who are not covered by insurance? (.) Does this abrogate the rights of parents (and their children) who may not be as good at writing letters as others? Do we remove the ability of AstraZeneca to make a profit, or regulate the amount of profit they are able to make? How can we (or an insurance company) decide who is to receive treatment, and who does not?

Update: Dr. Jen Gunter, in the Comments section below, correctly points out that I’ve made a mistake in my assumptions about mothers of premature infants with health insurance. The linked article here has the statistics: 79% of mothers of premature infants have private-pay health insurance; 21% have Medicaid. As the paper notes, premature babies born to Medicaid-covered mothers tend to have lower Apgar scores, implying that they are less healthy than premature babies born to mothers who are privately insured.