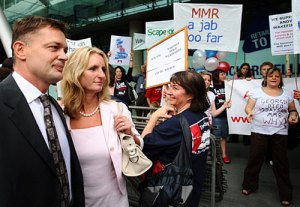 Andrew Wakefield and his supporters (Image from depletedcranium.com)

Last week brought news (but, it should be noted, not “new” news) that the British Medical Journal is about to publish an article by journalist Brian Deer implicating defrocked British physician Andrew Wakefield in outright fraud related to his allegations of a link between vaccinations and autism.

In 1999, Wakefield and co-authors published a study in the prestigious British medical journal The Lancet which claimed a strong association between the use of combined mumps-measles-rubella (MMR) vaccine and autism.

Given the incidence of autism-spectrum disorders, which now approaches 1% in the U.S., and the emotional pain inflicted on autism sufferers and their “neuro-typical” family members, it’s obviously of keen interest to the medical community and the public at large to get to the bottom of the current upswing in diagnosed autism cases. Wakefield’s article generated a huge amount of interest.

Problem is, it’s all lies.

For a time after its initial publication in 1999, one could make the argument that Wakefield was misguided and not a con man. However, that time has passed. Deer’s work, and that of others, has conclusively shown that Wakefield perpetrated a fraud of incredible proportions.

Wakefield’s co-authors have all abandoned him. No one has been able to replicate Wakefield’s work. Seth Mnookin, whose upcoming book The Panic Virus is set to savage Wakefield further, has some criticisms of the way the BMJ announcement was handled, but not of their basic findings.

I am struck by the parallels between Wakefield and his British and American supporters, and the Tea Party movement in America. In both cases, there is an outright denial of objective facts and truth, in favor of an emotionally based appeal to fear. In both cases, there is an explicit or implicit conspiracy theory that underpins the claim of victimhood. For example, Wakefield has claimed Deer is a “hit man brought in to take me down” in the employ of Big Pharma and the Monolithic Medical Community when in point of fact there’s ample evidence that Wakefield himself perpetrated this particular fraud in order to financially benefit from a role as an expert witness in civil suits against Big Pharma.

There’s no doubt that mercury, in sufficiently high doses, can cause brain damage. No one disputes this. The technical aspect of the argument has to do with something called a “dose-response curve” where we plot the response (in this case, brain damage) versus the dose of the substance. Most people (incorrectly) assume that dose-response curves are linear. That is, if I consume 10 milligrams of mercury and it kills 100 brain cells, that if I consume 1 milligram of mercury it will kill 10 brain cells. That’s not the case for most substances. Note that at the left end of the curve pictured here, there is no effect whatsoever regardless of the dose. Probably something like this happens with mercury (actually the mercury salt thiomerosal) in vaccines, but as far as the low end of the dose-response curve, technical difficulties make this hard to test in animal systems. You would have to give millions of mice (for example) tiny doses to see any effect. In the absence of any evidence for an effect in humans, there’s really no reason to embark on such an expensive and time-consuming study.

Dr. Jen Gunter’s blog posted up an excellent article yesterday on whether “heavy metal poisoning” due to vaccines is reality or fantasy.

Humans are wired to associate events, even when no association exists. It’s a survival skill. (“I ate two of those purple berries from the bush over there, and a few hours later, I felt really sick. I hate that bush and all purple berries.”) It worked well in the primordial environment, but it steers us wrong in our complex modern world. (“Barack Obama gave a speech, and the stock market tanked. I hate Barack Obama and everything he stands for.”)

Is the Tea Party a good example of a Panic Virus?

Monotreme is an unabashedly liberal dog lover, writer, and former scientist who now teaches at a University in an almost-square state out West somewhere. http://www.logarchism.com | http://www.sevendeadlysynapses.com
View all posts by Monotreme →
This entry was posted in Conspiracies and tagged Andrew Wakefield, MMR vaccine controversy, Seth Mnookin. Bookmark the permalink.

21 Responses to In the Wakefield