From My Cold Dead Hands 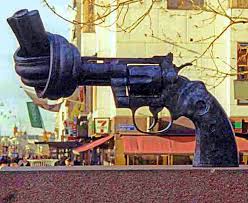 Had lunch here. It's in France.

It’s been a week since a lone individual in Tucson decided; for whatever reasons, to disrupt our world. Since then, eulogies have been delivered, tears were shed, a funeral for a nine year old girl was held where hundreds lined the street and the 9/11 flag was flown at her memorial (Christina was born on September 11, 2001). People immediately began trying to deal with the reasons behind the attempted assassination of a US Congresswoman, a federal judge, and other innocent bystanders as well as the motives of the shooter.

Inevitably, amongst the grief and finger pointing, the subject of gun control usually comes up. Gun regulation is a curiously contentious subject. And before I go any further I’ll point out that it’s even a topic the contributors to this blog are reluctant to approach due to our own differing perspectives. And, as a gun owner, I am uncomfortable with making any statement in favour of gun regulation that would appear hypocritical. 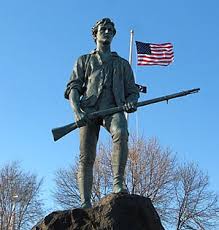 Gun culture is unusually pervasive in American society. In fact, it was the second most important thing on our minds when we were drafting our Constitution. It was succinct and to the point. It reads:

A well regulated militia, being necessary to the security of a free State, the right of the People to keep and bear arms, shall not be infringed.

Many have imposed their own interpretations to this vague statement. For example:

It’s not about my ability to hunt, which I love to do. It’s not about the ability for me to protect my family and propity [sic] against criminals, which we have the right to do. But it’s all about protecting ourselves from a tyrannical government of the United States.

The Second Amendment is not about hunting deer or keeping a pistol in your nightstand. It is not about protecting oneself against common criminals. It is about preventing tyranny. The Founders knew that unarmed citizens would never be able to overthrow a tyrannical government as they did. The muskets they used against the British army were the assault rifles of that time.

But these are the most extreme of interpretations of the second amendment. Many think there are more reasonable interpretations that say, “yes it is about hunting and protecting your home from criminals.“ The second amendment was written at a time when the army was fledgling and the original settlers didn’t trust governments because they had just been in war with the government they sought emancipation from. Times were different then as well. You didn’t just run down to the store to get butter; you churned it or bartered for it. And guns were utility instruments. You ate what you killed. No one is absolutely certain what the second amendment was meant to protect. Here from FindLaw:

In spite of extensive recent discussion and much legislative action with respect to regulation of the purchase, possession, and transportation of firearms, as well as proposals to substantially curtail ownership of firearms, there is no definitive resolution by the courts of just what right the Second Amendment protects.

Yet there is a strong gun lobby that advocates that any restriction, no matter how minor, is a fundamental abridgment of the second amendment. In other words, any restriction means tyranny. The Government is coming to take your guns. This argument fails for a couple of reasons. Primarily, the assumption that the government has an interest in taking our guns. Secondly, that there is some sort of tyrannical government takeover happening. Neither is true. 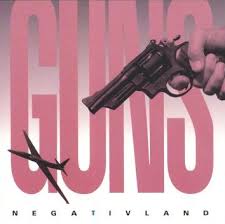 This is a collage piece from some talented individuals I had a chance to work with on copyright issues. I thought it was relevant to the topic. Guns by Negativeland (Warning: graphic imagery).

But let’s start with gun control. A civilized society of great numbers must out of necessity make regulations that affect us all. Take driving for example; it’s a highly regulated right that US citizens enjoy. We are required to take driving classes, we are required to meet certain criteria for qualification, we have to pass a test, and we have to make arrangements for insurance in case we have an accident so that we don’t infringe on someone else’s privileges, you have to wear a seatbelt, etc.. Nobody ever cries, “They can have my car when they pry my car keys from my cold, dead hands.” Everybody gets that if you’re going to ride around in a seventy-mile-per-hour projectile in public, then certain restrictions apply to us all.

Gun restrictions? Not so tough. You aren’t required to pass any test to see if you know how to “control your gun.” Many states do not require you to register to carry a concealed weapon (I’m talking to you, Arizona as of 2010). You can be a total idiot and walk out of a gun show with an automatic weapon. In fact, there are people with clean records who do it for hire in order to supply Mexican drug cartels. A clean record and cash is all it takes. But why can’t there be restrictions that limit assault weapons? Why can’t we renew the rules that expired n 2004? There are all kinds of reasonable things we can do to prevent things like the Tucson Massacre from happening. Close the gun show loophole and require instant background checks at gun shows, require marked ammo, ban extended capacity magazines, restrict the transfer of firearms from one individual to another. There are lots of restrictions we could implement without taking anyones guns. And let’s face it; if you need an AK-47 to hunt, you should probably consider taking up another hobby.

And this isn’t even broaching the topic of mental health. There are safeguards we could pursue that would help ferret out the mentally unstable from purchasing guns let alone getting treatment for the mental illness.  And then there’s that drug war going on south of the border. 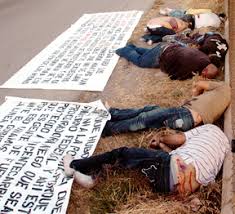 Trust me. I could have gone way more graphic than this.

About 30,000 people have died in Mexico as a result of smuggled guns from America; all so that we can have a 4:20 moment. But hey, dude, it’s all good. But beyond our casual God, supply and demand model, let’s get back to the violence in our country. Did you know that there is no statistical correlation that a gun will protect you? In fact, there is evidence to the contrary. Many guns end up in suicides or crimes of passion. Here is a breakdown from the Violence Policy Center.

What is the reason behind this almost fanatical desire for unlimited gun use? Why do the NRA and other gun control opponents scream “tyranny!” whenever any proposed legislation to gun ownership is proposed? Why do they think the rest of us are coming for their guns? I can only surmise that it’s a holdover from the cold war. We have the bomb. Oh yeah? We have the H-bomb! Oh yeah? We have a bunch of bombs and we’re parking them off your coast in Cuba. Oh yeah? Well…you get the concept of escalation.

Maybe the gun thing is similar. I have to protect my family. If my neighbor or my government doesn’t see things my way, I need to be ready to take them down. It’s a kind of cold war mentality. We need to destroy the Soviets at all costs regardless of the harm we do to the planet.

Funny thing is, violence has changed. Mass killings are a product of this generation. “Going postal” is a recent phrase. Walking into a school with the intent of killing as many people as possible before you take your own life is frighteningly new. It’s narcissistic. It’s a way to say, “I’ll show you all!” regardless of whether anyone you’re killing was personally responsible for your angst. Whether they pay for it with their lives or your reputation is immaterial. Just get me on the news at 6:00 before I die.

And look at what’s happened. On the networks, cable, and internet, everyone wants to know whether the Tucson gunman (you may have picked up on my intentional point of not mentioning his name) was a Democrat or Republican. Was he liberal or conservative? Somebody must have influenced this guy. As it turns out, he was just…warped.

So my question is, how much tragedy do we have to suffer before it becomes necessary to impose restrictions? Often, these laws are only put into place because of a tragedy. Is that how we should govern? And why is there an expiration date on the legislation? These extended clips were banned during the Clinton administration but the ban expired in 2004 and Bush neglected to renew them. My incredulous question is why are there term limits on restrictions in the first place?! Why can’t we agree that some gun stuff is as equally bad now as it will be ten years from now?

Statistics indicate that there will be another mentally unstable individual who will attempt something similar to the Tucson Massacre in the future. Some say more guns are the answer, the data indicates that it is not. And while second amendment zealots may scream “tyranny!” remember, democracy demands that we temper this rhetoric and also remember, there is a price we have to pay for it.

The argument that “You can have my guns when you pry them from my cold dead hands” really doesn’t have any meaning if you’re dead, does it? It’s an empty act of defiance.

Jon Meacham on Meet the Press

While I was writing this article, I ran across a fellow southerner who also grew up on the banks of the Tennessee River. He appears to agree with me.

The argument from Second Amendment purists that such things will then only find their way to the black market is unconvincing. The perfect cannot be the enemy of the good. A ban on these clips would mark a step toward bringing order out of the chaos of the Tucson tragedy.

The bringing-about of order is the first and fundamental task of government. We accept limits on our rights for the sake of a larger social compact all the time. This pistol with this high-capacity clip is a tool of destruction. I say this as someone who does not want to give up my own guns—but who believes that with rights come responsibilities. Yes, liberty is precious. But so is life. It should not be so difficult for men and women of good will and good heart and sound mind to find the right balance between the two.

How many Christina Taylor Greens does it cost before we realize that our paranoia is costing us our liberty? At what point do we accept that some restrictions are good? When will we make a distinction between what is a Constitutional right to bear arms for protection and an attempt to accrue power?

Mr. Universe is a musician/songwriter and an ex-patriot of the south. He currently lives and teaches at a University in the Pacific Northwest. He is a long distance hiker who has hiked the Appalachian Trail and the Pacific Crest Trail. He is also an author and woodworker. An outspoken political voice, he takes a decidedly liberal stance in politics.
View all posts by Mr. Universe →
This entry was posted in Uncategorized and tagged Gun control, Gun politics, Second Amendment to the United States Constitution. Bookmark the permalink.

53 Responses to From My Cold Dead Hands