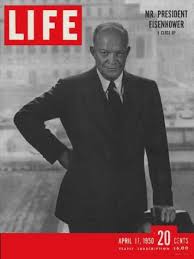 Not wanting to steal the thunder from Monotreme’s most excellent article of Dr. King and his legacy, I felt it important enough to note that today is also the anniversary of another significant event. It is the fiftieth anniversary of President Dwight D. Eisenhower’s farewell address warning America about the Military Industrial Complex.

The second world war brought about an immense surge in industrial might. The United States dropped everything to fight enemies on multiple fronts. Car manufacturers halted production and tooled up to make tanks and planes. American industrialist Henry Kaiser produced 747 ships alone including Liberty Ships and Victory ships designed for the singular purpose of supplying the war effort to defeat Fascism and the Empire of Japan. 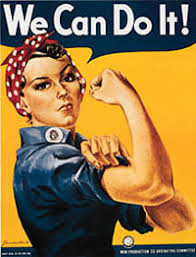 Women stepped out of their traditional roles as homemakers to take up manufacturing jobs appropriately represented in the image of “Rosie the Riveter.” The public rationed everything and war bond sales soared. Everyone sacrificed for the war effort.

Eisenhower correctly recognized that the United States would never truly demobilize after the war and, as a result of winning WWII, we now had a ongoing business of making war machines, particularly since the Soviet Union was doing the same.

Building battleships isn’t a Mom-and-Pop operation. It involves contracts from multiple manufacturers. To supply a national military requires a national industry devoted to the task employing thousands and creating growth in communities. It’s the modern day version of the company store.

Eisenhower correctly realized that this could be a problem in the future. He warned of the growth of the military industrial complex and the risks it could pose. He cautioned that “The potential for the disastrous rise of misplaced power exists and will persist.” He alluded to the Military Industrial Complex needing to be in a perpetual state of war to sustain itself. And America, for the most part, has been at war with someone ever since.

Many have likened the complex to the “Iron Triangle.” In one corner resides the Government and taxpayer money. In the second corner is the military and the arms industry and in the third is the public since this is a democracy. We have a say in how the taxes are spent. This is tied up in local jobs and the secondary services sector (riveters have to eat, right?). What you wind up with is a Möbius loop that is difficult to break or extract oneself from.

Now fifty years from that speech it appears that we have become the product that an anxious President feared. SkyNet is upon us. What do we do now?

Mr. Universe is a musician/songwriter and an ex-patriot of the south. He currently lives and teaches at a University in the Pacific Northwest. He is a long distance hiker who has hiked the Appalachian Trail and the Pacific Crest Trail. He is also an author and woodworker. An outspoken political voice, he takes a decidedly liberal stance in politics.
View all posts by Mr. Universe →
This entry was posted in Uncategorized and tagged Cold War, Dwight D. Eisenhower, Military Industrial Complex. Bookmark the permalink.

55 Responses to Ike Was Right