MSNBC abruptly announced on Friday that Countdown with Keith Olbermann was being cancelled and that the network and Mr. Olbermann were parting ways. This was no small decision as Keith had two years left on his contract reportedly worth $14 million. Many people were surprised by this sudden departure. Countdown, after all, was the highest rated show on MSNBC. In fact, some argue that Countdown made MSNBC. When Keith was hired in 2003 the network was an abysmal last place contender compared to all the other news networks.

I particularly appreciated Countdown. I had just been through the 2000 election debacle. George W. Bush had been appointed to the presidency based on a corrupt supreme court justice and a flawed electoral college combined with political upheaval in Florida governed at that time by Bush’s brother.

Then 9/11 occurred. Our nation came under attack and the tepid response of the man who would be king illustrated just how vulnerable we were. In fact he thought, ‘Hey, what a great opportunity to show my Dad up. Let’s invade Iraq heh, heh, heh!’ 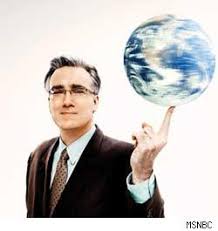 Keith was given a fill-in slot on a little known show on a fledgling network in 2003. That turned into a regular gig that would last for almost eight years. And it was a timely decision. I thought the sane world was coming to an end and I couldn’t fathom how to deal with it. Then Keith started posting his opposition to what the Bush administration was doing. He began to expose the Bush administration for all it’s egregious errors. Suddenly, I had a voice.

After 9/11 there was a jingoistic, McCarthy-like response. It’s understandable but it was also wrong. Countdown became the voice that countered that. And I owe Keith Olbermann for this blog. I took up the mantle of reason and decided to voice my perspective because of his dissent against the status quo.

Interestingly enough, I am tangentially associated with all of this. I was a survivor of a merger / acquisition of Universal. I chose to leave the media world for academia during the Internet takeover of content in the late nineties. The writing on the wall was clear; the entertainment industry was fundamentally changing and people outside of it were going to be calling the shots. Which is why I’m delighted to read that Edgar Bronfman Jr. has recently been found guilty of securities fraud. Didn’t see Steve Jobs coming, did you, Edgar? Payback’s a bitch, ain’t it? How does it feel having a larger entity dictate circumstances in your life like the Seagram acquisition did in mine?

We live in an age of media Tycoons. Ted Turner was the son of an Atlanta billboard advertising family business. He went on to create CNN. Rupert Murdoch started with a newspaper in Adelaide, Australia. He founded FOX News. The primary force behind these media conglomerates has been advertising. Networks have had decades to perfect advertising. They created shows called ‘soap operas’ because they sold detergent to housewives during the commercial break from empathizing with living lives of loud desperation.

Half of every dollar you spend will go towards some kind of advertising. The commercials on the traditional networks mirror the demographic of its aging audience. Medical companies who offer drugs with fluffy ad names, like ‘Boniva’ or ‘Lunesta’ to address ailments most young people don’t experience like ‘restless leg syndrome’ or ‘chronic dry eye’. Those are like diseases invented by the drug industry. And let’s face it, if you’re not having sex like you did when you were in the Sigma Chi house in college, then you’re obviously inadequate unless you buy [insert fancy sounding drug here]. Hump your doctor’s leg if you have an erection lasting more than four hours.

It’s no secret that Keith had a contentious relationship with the media overlords. He parted ways on ESPN under terse circumstances. He had actually been at NBC previously. One NBC News executive said on Sunday: “Give us a bit of credit for getting eight years out of him. That’s the longest he’s been anywhere.”

Frankly, I saw it coming. Every time I saw Sam Seder sitting in I thought to myself, ‘Well, they finally canned Keith’. After the suspension for his contributing to (of all people Gabrielle Giffords) political candidates on some technicality in his contract, I’m surprised it took them this long.

Keith will surface again. He has a non-compete clause in his contract but once that’s over I suspect we’ll see him back in action.

Mr. Universe is a musician/songwriter and an ex-patriot of the south. He currently lives and teaches at a University in the Pacific Northwest. He is a long distance hiker who has hiked the Appalachian Trail and the Pacific Crest Trail. He is also an author and woodworker. An outspoken political voice, he takes a decidedly liberal stance in politics.
View all posts by Mr. Universe →
This entry was posted in Uncategorized and tagged Countdown with Keith Olbermann, Edgar Bronfman Jr, Keith Olbermann, MSNBC, Rupert Murdoch, Ted Turner. Bookmark the permalink.