In this corner… is an ongoing series looking into the viability of potential candidates for the 2012 Presidential race.

(Editors Note: Palin officially declared her decision not to run for President on October 7th)

This is the first of a new series that we are calling the Contenders. We thought it would be useful to evaluate the potential candidates for the 2012 Presidential race. For the moment we’re going to skip President Obama unless circumstances or information surfaces that dictate we pay attention to his presumed incumbency. 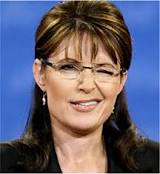 Sarah Palin with a plank in her eye (courtesy Matt. 7:3)

I sort of drew the short straw and as a result will begin with Sarah Palin. Plus, there has been a challenge issued by Dana Milbank to make February a Palin free month. We thought we might attempt to accept that challenge so we wanted to get her out of the way this week. Each of us will tackle potential candidates on an irregular basis. We’ll provide background information along with public opinion polling to add to the conversation of viability.  And what better way to start the series than with possibly the best known person of the field of contenders?

Sarah Palin became an overnight sensation when John McCain’s political handlers decided he needed to bring sexy back during the 2008 Presidential campaign. McCain needed a Vice President and he also needed a public relations shot in the arm to combat Obama’s momentum. Palin was Governor of Alaska which sort of enhanced McCain’s ‘rogue’ image and she was also camera friendly. She was also intended to balance out the ‘different’ category. Obama was black; so McCain needed a woman. That’s progress, right? Plus, there were also all those disaffected Hillary voters or PUMAs to be had.

But Palin wasn’t vetted thoroughly. It turned out she came with all kinds of baggage that would play itself out in the ensuing months of the campaign such as complex family dynamics, questionable political strategies, questionable education background, possible legal problems, etc.

In retrospect it looks as if Palin was an empty skirt. She drifted through five colleges and used her beauty queen looks to achieve her objectives. As far as political saavy, there was little substance. But she talked a good game. Pitbulls, lipstick, teleprompters, ‘reload’.

Then, of course, the interviews. After the disastrous Katie Couric interview, it became obvious that Palin was a word salad shooter. This was followed by the shopping spree. The McCain campaign began to wince every time Palin opened her mouth. By the time we got to see her in the Vice Presidential candidate debate, the honeymoon of popularity peaked and had begun to decline. This was no realistic contender. It was painfully obvious to everyone that Palin had no business being one heart attack away from the Oval office (McCain was 72 by now). 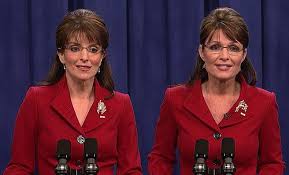 Then there was Tina Fey. I honestly believe that Tina Fey’s impression had as much to do with the McCain campaign’s downfall as did his ‘I’m suspending my campaign’ gambit when the economy tanked at the end of Bush’s last year. Fey’s uncanny likeness combined with her spot on North Dakota accent illustrated the absurdity of nominating Palin in the first place. Fey won an award, McCain lost the Presidency. Coincidence?

We thought that might be the end of it but the chum was in the water. Palin went back to Alaska and did something remarkable; she quit her elected job. In a word salady type of press release she mumbled that she was patriotically leaving her elected post as Governor of Alaska not even two years into her position. Simultaneously, she became the darling of the newly emerging reactionary Tea Party who believed she could do no wrong. So Palin did what any politician with fading popularity does, she grabbed the bullhorn and stirred the Tea Party into a frenzy. She wrote a book (or somebody did and she took credit), started a speaking tour, and generally became a rock star of a political movement that had no foundation. Suddenly her net worth skyrocketed into the millions; far more than she could ever make as a politician. But she also began backing other Republican candidates who began to unseat incumbents (she also caused some candidates to lose for the same reason). With the help of a media with a morbid gawk-at-the-car-wreck mentality, she galvanized a counter movement to the change that President Obama was bringing about. Funny thing is that she really didn’t care about the movement; just the attention and milking it for all it was worth. 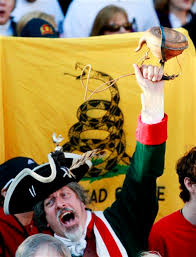 On a personal note, Palin came to my little northwest college town to stump for the Republican party (an event set up before she became the Tea Party darling). I helped arrange a protest outside of the hotel where she was speaking. Much to her credit, Bristol Palin actually came out and spoke to us. Props for that. Bristol later went on to be a finalist on Dancing with the Stars.

Sarah Palin continued her tour across America as the Obama administration began grappling with the problems of the nation. There was frequent speculation that we would see Palin again as a Presidential candidate in 2012. There continues to be. It’s all the rage these days. Will she run or won’t she? She’s mum on the subject but doesn’t rule it out. And why not? Palin makes more money as long as she’s the center of attention.

Polling numbers suggest that it’s a losing proposition. Palin’s popularity is at an all time low particularly in the wake of her televised ‘I’m the victim’ statement following the assassination attempt on Representative Gabrielle Giffords. Her favourability ranks around 19%.

Is Sarah Palin still a viable candidate for the Republican nomination? Certainly. She still has an ardent following in the Tea Party. However, the Tea Party is difficult to quantify since it isn’t a legitimate body and you can’t really tell who is a member. Can she win? Not likely.

Many, including some potential Republican candidates, would like her to be nominated as the Republican candidate based solely on her unelectability. Many of the rest of us would just like to watch the slow-motion car wreck in action. Some, myself included, have contemplated switching political parties to vote for her in the Republican primary whereupon we would switch affiliations back and vote against her.

Sarah Palin is an enigma, wrapped in hysteria, slathered with a topping of ignorance. If she were ever to win, I call upon the four horsemen of the apocalypse to reign fire upon humankind because we would certainly deserve it.

Mr. Universe is a musician/songwriter and an ex-patriot of the south. He currently lives and teaches at a University in the Pacific Northwest. He is a long distance hiker who has hiked the Appalachian Trail and the Pacific Crest Trail. He is also an author and woodworker. An outspoken political voice, he takes a decidedly liberal stance in politics.
View all posts by Mr. Universe →
This entry was posted in Contender Series and tagged John McCain, Sarah Palin, Tina Fey. Bookmark the permalink.

61 Responses to In This Corner…Sarah Palin