Haley Reeves Barbour is currently serving as the Governor of Mississippi. He is also serving as the Chairman of the Republican Governors Association. He has previously served as the Chairman of the Republican National Committee during the Clinton administration from 1993 to 1997. He is term limited and cannot run for Governor again in 2011 and as such is considering an upward political move. He has a political career that spans four decades and is considered a serious contender for the 2012 Presidential race. His political recognition is rising but polls have him as only pulling in 1% to 2% as a primary challenger. It’s likely that will change as the 2012 race draws near. 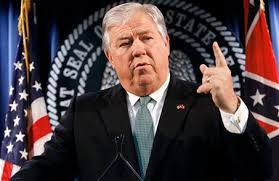 Born and raised in Yazoo City, Mississippi in 1947, Barbour attended the University of Mississippi where he received his J.D. He subsequently went to work at his father’s law firm. It didn’t take him long to get into politics. While in college he worked for a semester in the Nixon campaign in 1968.  Later he worked for Gerald Ford’s campaign in 1976 and then Texas Governor John Connally‘s Presidential run in 1980.

Barbour ran for U.S. Senate in 1982 but could not unseat the incumbent Democrat, John Stennis. He spent the rest of the eighties working as an aide to the Reagan administration followed by campaigning for George H. W. Bush in 1988.

In the early nineties Barbour began the phase of his career as a lobbyist when he formed the Barbour Griffith & Rogers group. BGR would become one of the biggest lobbying groups for the tobacco industry in Washington, D.C. It was during this period that he became the RNC chairman and while he was chair, Republicans managed to gain control of both houses for the first time in decades. Barbour was quietly building a powerful political résumé. Barbour himself is quick to point out that he possesses a perfect “trifecta” of lawyer, lobbyist, and politician as his professional bona fides.

Barbour did receive a great deal of positive press after Hurricane Katrina when he emerged as a boots-on-the-ground problem solver for the region. Katrina had devastated Mississippi’s coast and their billion dollar casino industry. He responded well to the catastrophe and for many outside of Mississippi he became a known factor just as Rudy Guiliani had after 9/11.

Barbour also managed to balance Mississippi’s budget, though he did it in typical Republican fashion by slashing social services such as Medicaid and education. There has been a long standing joke in Alabama whenever someone is critical of that state’s low rankings on education. The response is generally, ‘well could be worse; we could be Mississippi’.

There are many critics who think Barbour; or any southern candidate for that matter, is problematic. Some say, Barbour is a regional shoe-in, winning a region that is already a given, yet he is unable to translate that into other key states like New Hampshire or California. Some say the down-homey schtick isn’t playing well outside of the south. And there have been some misjudgments of late that illustrate the conflict between the down-homey and the needs of the rest of the nation.

Barbour has made statements that are being viewed at best as insensitive and at worst racist. His commentary has been known to gloss over the racial strife that occurred in Mississippi in the sixties. It’s possible he will not be able to transcend these statements and they may become a liability to the Republican party. It will likely haunt him through any Presidential campaign.

My best guess; he has the political creds, but lacks the empathy and legitimacy to overcome a Romney.

Mr. Universe is a musician/songwriter and an ex-patriot of the south. He currently lives and teaches at a University in the Pacific Northwest. He is a long distance hiker who has hiked the Appalachian Trail and the Pacific Crest Trail. He is also an author and woodworker. An outspoken political voice, he takes a decidedly liberal stance in politics.
View all posts by Mr. Universe →
This entry was posted in Contender Series and tagged Haley Barbour, Mississippi, Mitt Romney, Republican Governors Association, Republican National Committee. Bookmark the permalink.

94 Responses to In This Corner…Haley Barbour