Outrage Speech: Was the Left Right?

Pima County Sheriff Clarence Dupnik’s widely-reported observation that hate speech was partially responsible for the shooting of Rep. Gabrielle Giffords (D-AZ) has prompted several heated discussions on this blog, as well as other venues.

Let me say one thing, because people tend to pooh-pooh this business about all the vitriol that we hear inflaming the American public by people who make a living off of doing that. That may be free speech, but it’s not without consequences.

Where’s that toxic rhetoric coming from? Let’s not make a false pretense of balance: it’s coming, overwhelmingly, from the right. It’s hard to imagine a Democratic member of Congress urging constituents to be “armed and dangerous” without being ostracized; but Representative Michele Bachmann, who did just that, is a rising star in the G.O.P.

And there’s a huge contrast in the media. Listen to Rachel Maddow or Keith Olbermann, and you’ll hear a lot of caustic remarks and mockery aimed at Republicans. But you won’t hear jokes about shooting government officials or beheading a journalist at The Washington Post. Listen to Glenn Beck or Bill O’Reilly, and you will.

On this blog and elsewhere, the discussion devolved into a predictable round of tu quoque, where commenters who identified themselves as conservative accused the left of just as much outrage speech as the right.

The [Department of Homeland Security] report [cited by Krugman] “typically” failed to take into account the fact that virtually every terrorist attack and instance of extreme violence perpetrated had been repeatedly administered by denizens of the Left, to include the authoritarian Jihadists and a now deranged environmentalist wackoism.

He then proceeded to list, in some detail, President Obama’s alleged outrage speech including “calls for violence.” Do the readers of this blog see any examples of outrage speech in the examples cited in Secrest’s blog? Res ipsa loquitur.

Blogger Vyan at Daily Kos then listed examples of alleged calls for violence on Fox News, and documented their outrage at Krugman’s column.

The connection between “outrage speech” and violence may be tentative, at best. One aspect of the phenomenon that’s amenable to analysis, however, is whether the right does it more than the left, or whether they are equally culpable.

This question was approached by Tufts University professors Sarah Sobieraj and Jeffrey Barry in an article titled “From Incivility to Outrage: Political Discourse in Blogs, Talk Radio, and Cable News,” and published in the February, 2011, issue of the peer-reviewed journal Political Communication. (Because of the extended lead time between the submission and publication of research findings, we can be sure that this study was initiated well before the current controversy. The data were gathered in the spring of 2009.)

The variables measured by the Tufts researchers were: 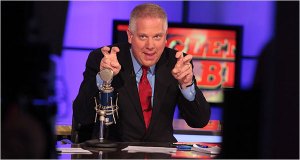 Amazingly, 100% of evening cable TV shows, 98.8% of talk radio programs and 82.8% of blog posts contained examples of what the researchers call “outrage speech.” They noted some cases where the incidents of outrage occurred at a rate of more than one per minute.

Is one side of the political debate more likely to engage in outrage speech than the other? Yes, and by a wide margin. From the article:

Our data indicate that the right uses decidedly more outrage speech than the left. Taken as a whole, liberal content is quite nasty in character, following the outrage model of emotional, dramatic and judgment-laden speech. Conservatives, however, are even nastier.

The data showed the political right engaging in an average of 15.57 outrage acts per case, while the left engaged in 10.32 acts per case.

So, while there is plenty of blame to go around, and a general reduction in political outrage speech might leave both sides with much less to say, this study makes it clear that the outrage speech on the right is more prevalent than on the left.

Monotreme is an unabashedly liberal dog lover, writer, and former scientist who now teaches at a University in an almost-square state out West somewhere. http://www.logarchism.com | http://www.sevendeadlysynapses.com
View all posts by Monotreme →
This entry was posted in Uncategorized and tagged Gabrielle Giffords, Keith Olbermann, Outrage speech, Rachel Maddow. Bookmark the permalink.

73 Responses to Outrage Speech: Was the Left Right?