Democrats Have Left the Building 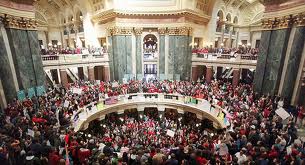 The Rotunda of Wisconsin's Capitol

In a follow-up to my earlier post, it appears that Wisconsin Democrats have left the state in order to deny a quorum on Governor Scott Walker’s union busting plans. Madison schools (and other cities in the state) are again closed due to a ‘sick-out’ and more people are expected to show up to the protests today.

A little peaceful rebellion can be a good thing, now and then.

Update: All of Wisconsin’s Democratic lawmakers are holed up in a Best Western in Rockford, Illinois. Wisconsin’s Sergeant at Arms cannot compel Senators to attend their session if they are outside of state lines. Former Representative David Obey says Governor Scott Walker is channeling his inner Mubarak.

49 Responses to Democrats Have Left the Building