The Revolution Will Be Tweeted…In Wisconsin? 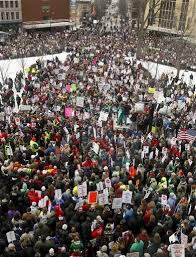 Perhaps revolution is catching on. With all the unrest we’ve been talking about in the Middle East with social networking fueling the fires of participative democracy, an interesting thing is happening in Madison, Wisconsin. Around 30,000 people showed up at the Capitol to protest Governor Scott Walker’s proposal that is designed to all but eliminate collective bargaining for most public employees.

Schools actually shut down because so many teachers called in sick to attend the protest. Many students did the same and showed up to support their teachers. Many camped out in the capitol rotunda overnight a la Tahrir Square. Even several players of NFL Champions the Green Bay Packers came out to support the efforts. 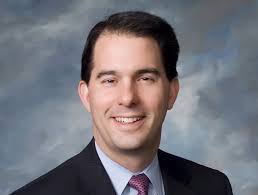 But here’s the real kicker: Governor Walker threatened to call the National Guard in to respond to any union walk-out.

This is nothing new in Republican politics. Ronald Reagan started it in 1981 when the Professional Organization of Air Traffic Controllers  staged a mass walk-out despite clauses in their contracts that said it was illegal to do so. Responding to pressures of increased air traffic, stress, and a rising suicide rate, PATCO wanted to negotiate for better hours, pay, and benefits.

The Reagan administration didn’t want to acquiesce to their demands for fear that other government organizations would do the same (many had already tried) and gave the over 11,000 PATCO members 48 hours to return to their posts. This despite the fact that Reagan was a member of the AFL-CIO and had received the support of PATCO during his campaign by acknowledging the problems of the industry and promising to address them. PATCO was one of the few unions to support Reagan. Regardless, 48 hours later; he fired them all, even hauling some of them off to jail. Later that year, PATCO was decertified.

Reagan actually received high marks with the public for his actions and ironically, Washington National Airport was renamed Reagan National. Many in the aviation industry refuse to call it that and still just refer to is as ‘National’. It took a decade to address the problems of air traffic controllers after that. Union busting has been a favourite Republican pastime ever since.

Governor Walker has announced plans that would remove the collective bargaining rights and slash benefits for state employees. He’s attempting to jam a bill through Wisconsin’s Senate right now. In attempting to address the states $137 million budget deficit, Walker has decided to put it on the backs of the public employees  rather than the corporate taxes which have fallen by half since the eighties. The Wisconsin Department of Revenue estimates that 2/3 of corporations do not pay any taxes.

Labour Unions, of course think this has little to do with the deficit and more to do with union busting and eventually decreased statewide wages. To add insult to injury, Wisconsin is the birthplace of the collective bargaining movement and employees are incensed that this would be attempted to sneak through Congress without any input from the union.

In one of the articles below, the author cites State Bureau statistics that indicate that the ‘financial crisis’ Walker is using as his excuse to shove this legislation through is false. He states:

[the reason for the current deficit is] because Walker and his allies pushed through $140 million in new spending for special-interest groups in January. If the Legislature were simply to rescind Walker’s new spending schemes — or delay their implementation until they are offset by fresh revenues — the “crisis” would not exist.

His perception is that Governor Walker has manufactured the crisis and is using it to union bust in a long term plan to bilk money off of the middle class and funnel it upward to (often out-of-state) corporate interests.

Wisconsin is not alone. Ohio’s Governor; while not putting the National Guard on alert, has said that any striking employees should be fired. There appear to be similar uprisings in Tennessee and other states. Governor Christie of New Jersey made similar remarks yesterday.

This smells of a Republican plan to survive the economic crisis that they are responsible for causing while not suffering any of the consequences of their actions. Perhaps Thoreau is right and a little civil disobedience is in order. Maybe Egypt is right; much to Glenn Beck’s worst nightmare, and we could use a little revolution.

Mr. Universe is a musician/songwriter and an ex-patriot of the south. He currently lives and teaches at a University in the Pacific Northwest. He is a long distance hiker who has hiked the Appalachian Trail and the Pacific Crest Trail. He is also an author and woodworker. An outspoken political voice, he takes a decidedly liberal stance in politics.
View all posts by Mr. Universe →
This entry was posted in Uncategorized and tagged Madison Wisconsin, Ronald Reagan, Scott Walker, Wisconsin. Bookmark the permalink.

35 Responses to The Revolution Will Be Tweeted…In Wisconsin?