Like Wisconsin, Indiana’s Democratic legislators have also left the state to thwart a similar Republican bill to bust the unions. Governor Mitch Daniels has decided not to pursue the same measures as Governor Scott Walker by threatening to call in the National Guard or sending troopers after the legislators. Wisconsin, meanwhile, is withholding the paychecks of their wayward Democratic legislators who are reportedly in Illinois. They must now pick up their paychecks in person. In Ohio, protesters have been locked out of the statehouse in anticipation of the scene going on in Wisconsin. It has been rumoured that New Jersey will follow suit with similar measures.

I don’t know what went down at the Republican Governors convention recently but the memo was definitely sent out. The results are going to be significant and not what the Republican Party expected nor wanted.

You Want Extra Cheese With That? 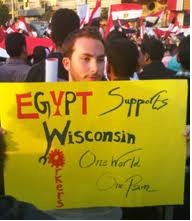 A Pizza Parlour in Wisconsin has been using social media to broadcast requests to feed protestors in Madison. So far they’ve received donations from Egypt, Korea, Finland, New Zealand, Denmark, Australia, Canada, Germany, China, England, The Netherlands, Turkey, Switzerland, Italy, and all fifty states in the US. The Pizza chain was so overwhelmed with orders they had  stop their delivery operations in order to continue the ‘Pizza revolution’.

Governor Walker has said that there could be 1,500 to 6,000 public employee layoffs in the next two years if his budget bill is not passed.

Mr. Universe is a musician/songwriter and an ex-patriot of the south. He currently lives and teaches at a University in the Pacific Northwest. He is a long distance hiker who has hiked the Appalachian Trail and the Pacific Crest Trail. He is also an author and woodworker. An outspoken political voice, he takes a decidedly liberal stance in politics.
View all posts by Mr. Universe →
This entry was posted in Uncategorized and tagged Scott Walker, Wisconsin, Workers' Unions. Bookmark the permalink.