This weekend, the Internets (a series of tubes) were buzzing about the “possible” indictment of Roger Ailes.

Ailes, you may recall, is the mastermind of Fox News. The accusation, reported in Friday’s New York Times, is that he obstructed justice by ordering Judith Regan to lie regarding her relationship with Bernard Kerik. The rumored indictment is based on a random overheard phone call, and an audio tape of the alleged obstruction of justice. The mere existence of the phone call was supposed to be sealed by court order, but the court order was not properly filed and so inadvertently became part of the public record.

Judith Regan is a polarizing figure in her own right. She spearheaded the failed O.J. Simpson project entitled If I Did It. Kerik, now jailed, was dating Regan and was closely associated with Ailes’ favored 2008 Republican candidate, former New York Mayor Rudolph Giuliani. At the time of the phone call in 2004, Ailes was positioning Giuliani for the 2008 Republican Presidential race, and Kerik was under consideration for the post of Secretary of Homeland Security. According to the accusations, Ailes ordered Regan, who was his employee at the time, to lie regarding the affair to avoid discrediting Kerik and, by association, Giuliani. Regan claims she made a tape of the phone call, and the court record seems to confirm her claim.

Ailes began his television career in the 1960s in his native Ohio, and then became a producer on The Mike Douglas Show, a popular talk show of that time.

It was in that capacity that he met Richard Nixon. Nixon had been defeated by John F. Kennedy in an extremely close election, with allegations of tainted politics and illegal votes from Mayor Richard Daley’s Cook County Democratic Organization. Nixon then returned to California and lost the 1962 gubernatorial election to Pat Brown (Jerry’s dad). His bitter concession speech became a classic piece of political theater and self-immolation, superseded only by Howard Dean’s primal scream therapy after his loss in the 2004 Iowa caucuses. I submit that this speech started the hoary right-wing meme of “the press has a liberal bias.”

Nixon wanted to renege on his promise to not be kicked around anymore by reentering the 1968 Presidential campaign as a Republican candidate. Ailes supervised the packaging and public image of the candidate. The race was thrown into turmoil by a series of events: a late decision (announced in March 1968) by incumbent President Lyndon B. Johnson not to run again; a country deeply divided by the Vietnam War and civil rights struggles; and the assassination of Robert Kennedy, the heir apparent to his brother’s legacy. Nixon’s surprising victory over the deeply divided Democratic party in 1968 was the subject of the best-selling book The Selling of the President, written by Joe McGinniss. 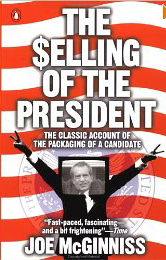 Joe McGinniss' The Selling of the President. Image: Amazon.

This is, of course, the same Joe McGinniss who famously incurred the wrath of former Governor Sarah Palin when he moved in next door to her in order to research a book he was writing about her. In a quote which shows his sushi-knife-like facility with words, he told Matt Lauer:

In my opinion, these reports are hanging on a very thin reed, indeed. I would interpret the buzz over this unsubtantiated report as due to two factors:

What do the readers of 538 Refugees make of these charges?

Monotreme is an unabashedly liberal dog lover, writer, and former scientist who now teaches at a University in an almost-square state out West somewhere. http://www.logarchism.com | http://www.sevendeadlysynapses.com
View all posts by Monotreme →
This entry was posted in Uncategorized and tagged Bernard Kerik, Judith Regan, Richard Nixon, Roger Ailes, Rudy Giuliani. Bookmark the permalink.

168 Responses to Is Roger Ailing?