(Updated: May 14, 2011. Huckabee announced at the end of his Fox show tonight that he would not seek candidacy for President. He cited that while “The external signs…point strongly towards running” that upon meditation he felt it wasn’t the right thing to do.)

One of the more charismatic potential candidates for the 2012 Presidential race is Michael Dale “Mike” Huckabee, the 44th Governor of Arkansas (1996-2007). Most recently, Huckabee ran for President in 2008 with remarkable success, despite the ribbing he got for his funny sounding surname (which is English in origin). He surprised more than a few people when he won the Iowa caucus. He was the last person to exit the primary when it became apparent that John McCain would take Texas and collect the requisite number of delegates for the Republican nomination. 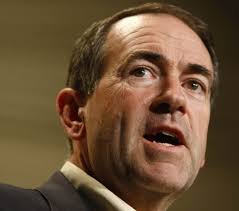 Huckabee began his career in religion. He is an ordained Baptist Minister with a degree from Ouachita Baptist University. Simultaneously, he also worked in radio and television, primarily Christian broadcasting. He still works as a Fox News Channel commentator and he filled in Paul Harvey’s time slot on ABC radio after Harvey’s death in 2009. He is also a published author as well as an accomplished musician who occasionally still plays with his band Capitol Offense. Expect to see them at the Republican convention.

Huckabee is quite popular amongst Republicans. He is noted for his battle with obesity. He lost a great deal of weight after he assumed the Governorship, although he appeared to have slipped in that battle on a recent guest appearance on The Colbert Report. Recently, his politics have become a bit more radical. He has made outlandish or incorrect statements regarding President Obama’s upbringing and distaste at actress Natalie Portman’s out-of-wedlock pregnancy. While Huckabee claims these are just misstatements, some suggest he is courting the Tea Party faction of the Republican Party.

There is a black mark on Huckabee’s record that may impede his candidacy. In a manner similar to the Willie Horton event that torpedoed Mike Dukakis’ Presidential hopes against George H. W. Bush, Huckabee granted clemency to a repeat offender that ended in tragedy. Huckabee allowed convicted armed robber Maurice Clemmons to go free when he played the Jesus-Get-Out-of-Jail card. Clemmons was subsequently arrested repeatedly for child molestation and aggravated assault but still remained at large. On November 23, 2009, for reasons still unknown, Clemmons walked into a coffee shop in a suburb of Tacoma, Washington and assassinated police officers Mark Renninger, 39, Tina Griswold, 40, Ronald Owens, 37, and Greg Richards, 42. Clemmons was killed two days later by a Seattle Police officer after a massive manhunt.

Perhaps it is in Huckabee’s Christian nature to be more forgiving. He has granted clemency to twice as many criminals as any of his predecessors. But there are plenty of widows, orphans, and citizens in the Pacific Northwest who won’t be nearly as forgiving at the ballot box. There are still lots of people who like Mike. Recent polling shows that Huckabee is a favourite for the Republican nomination. Politico has him leading the pack with 25% to Romney’s 21%. Gallup polls indicate the same. Polls in Iowa and New Hampshire, the first caucus and general election states, respectively, show him outperforming the rest of the crowded Republican field. Current polling against President Obama has him running almost even. Some, such as Public Polling Policy, have Huckabee leading by a one percentage point edge for the first time (this was before the Wisconsin dust-up).

Can Huckabee shake the Republican propensity to nominate the next in line (Romney, this time)? Will his down-hominess and radio personality win him a greater following? Will there be enough distance between the Washington State cop killer murders to allow people to forget? Can he get the Tea Party on board while keeping the rest of the Republican party from siding with Romney? It’s still too early to tell, but unless Romney makes a concerted effort to become active in the race, Huckabee remains the Republican’s best chance.

Mr. Universe is a musician/songwriter and an ex-patriot of the south. He currently lives and teaches at a University in the Pacific Northwest. He is a long distance hiker who has hiked the Appalachian Trail and the Pacific Crest Trail. He is also an author and woodworker. An outspoken political voice, he takes a decidedly liberal stance in politics.
View all posts by Mr. Universe →
This entry was posted in Contender Series and tagged Fox News Channel, Iowa caucuses, Maurice Clemmons, Mike Huckabee, Ouachita Baptist University. Bookmark the permalink.

21 Responses to In This Corner…Mike Huckabee