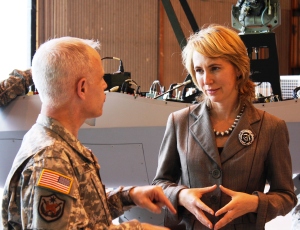 After dipping my toe in the water with Saturday’s micro-post, I was convinced by the readers of this blog that a “teachable moment” exists to talk about brain injuries with specific reference to Rep. Gabrielle Giffords’s condition and possible recovery.

First off, a disclaimer: I’m not a physician, and even if I were, I wouldn’t try to diagnose someone from a distance. Giffords’s family, understandably enough, has been very sparing in the information released. We don’t have a lot of information to go on, and some of it is self-contradictory. I’ll have to speculate a lot.

People who work with the brain see a lot of sadness. It gives them a demeanor that can seem a bit unfeeling to the outside world, but, like all people who choose to work with human fragility and pain on a daily basis, there is a need to develop defense mechanisms to shield oneself from the awful nature of the day-to-day work. If some of what you see below seems detached, it’s because that’s my personal strategy for dealing with what I know. If you’re interested in seeing how a real brain surgeon deals with his inner demons, I would recommend the book When the Air Hits Your Brain by Frank Vertosick, M.D. (He uses the above quote as the basis for his book title. As bitter as the quote is, I’ve found it to be true in my experience, with a few notable exceptions.)

Recovery from brain injury is a very individual process. Each person’s brain injury is different, and each person’s brain is different. I have seen some truly miraculous things. In general, injuries to children have better prognosis (pro-, “forward”; –gnosis, “knowing”). That is, we expect a better outcome from a child versus an adult with the same injury. That’s in part because our brains are designed to make about one-and-a-half times the number of “parts” we need, then discard one-third of those parts to get the final structure. For example, during the first few years of life, we make 1.5× as many contacts between nerve cells (synapses) as we need, and then trim them down to the adult number. (There is also a slow, steady decline from about the mid-20s to death, but that’s just too depressing for me to contemplate right now.) This accounts for the miraculous recovery made by children with brain injuries, although I’d also add that there are many, many children who struggle for a lifetime with brain injury for every miracle child you see on television.

The goal of physiatrists and occupational therapists is to work with the patient to regain, as much as possible, what are called the “activities of daily living” (ADLs). Typical ADLs would be eating, bathing, cooking, or moving around. Some of the most inspirational and wonderful colleagues I’ve had in a long career come from those areas of the profession. For example, as a graduate student, I trained at the Texas Medical Center and attended seminars at The [Texas] Institute for Rehabilitation and Research (TIRR), where Rep. Giffords is now recovering. I have a lot of confidence in their skill.

A patient who can answer all three of these questions accurately is said to be “oriented × 3.” 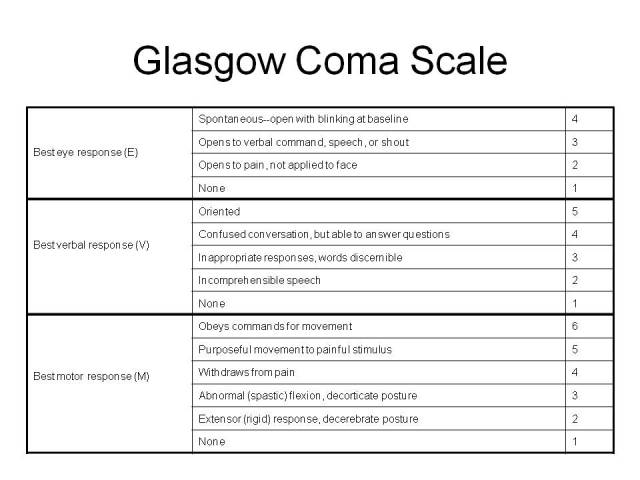 The second yardstick the physician will use is called the Glasgow Coma Scale (GCS). I hope I would score a 15, which is the maximum possible score. The lowest score (no eye response, no verbal response, no motor response) is 3.

In their paper “Neurobehavioural outcomes of penetrating and tangential gunshot wounds to the head,” (Brain Injury vol 14 no 7 pp. 649-657, 2000) Gillian Hotz and co-authors describe the “typical” results of brain injuries from gunshot wounds—but of course nothing is typical. From the paper:

Gunshot wounds are the second-leading cause of injury death in the U.S., with 34,600 firearm-related deaths in 1996.

Patients that survive to the point of being admitted to an inpatient rehabilitation programme have significant potential for functional improvement, but continue to demonstrate severe residual neurobehavioural sequelae.

In the Hotz et al. study, the average GCS for victims of a penetrating gunshot wound was 10.5 with a standard deviation of 4.3. This means (assuming a normal distribution) that 2/3 of their patients had a GCS between 6 and 15. I would assume that the population skews heavily to the lower end of the GCS, so I doubt whether the distribution is normal (i.e. perfectly bell-shaped).

The mean Functional Independence Measure (FIM) was 114. The FIM is proprietary, so I can’t present it here.

Rep. Giffords, by all accounts, has made an extraordinary recovery. The bullet did not cross the midline, which means a much less severe injury. Initial reports said she was shot in the back of the head and the bullet exited through the front, but those initial reports were not supported by the video and on further analysis, doctors apparently concluded she was shot just above the eyebrow at a range of about three feet.

The bullet entered, and remained on, the left side of the brain. Unfortunately, the left side of the brain is responsible for speech in about 95% of individuals. It is unclear whether Rep. Giffords is right- or left-handed, but the left hemisphere is dominant for speech in almost all right-handed people and about 2/3 of the left-handed. Separate regions in the left hemisphere control understanding speech versus producing speech. According to recent news reports, Rep. Giffords can understand speech and is speaking in sentences. She can repeat what is said to her. This indicates moderate to minimal damage to the speech centers. 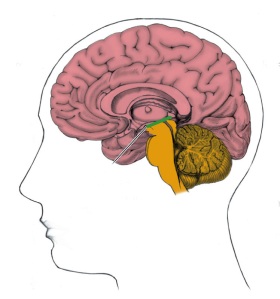 She can move her arms, and is now able to walk with assistance. This indicates that the motor regions of the left hemisphere, which control voluntary movement for the right side of the body, are damaged, but probably not severely. It is unclear whether she will be able to walk unaided after completing her rehabilitation.

Based on all this, I’m going to make an educated guess about the bullet hole’s location. One challenge in describing brain anatomy is to get people to visualize things in three dimensions. I included two pictures: one is a side view of the brain inside the head, so you can imagine where a bullet would travel if the victim were shot above the eyebrow. From all indications, the bullet track was above the corpus callosum, the “lazy C”-shaped structure seen in the middle of the brain here.

A speculation on the bullet trajectory. Modified from an image in Neuroanatomy through Clinical Cases, Blumenfeld, copyright Sinauer Associates.

The image at right shows the primary motor cortex in a human brain both in side view and in cross-section. The red arrow shows the location of the brain cells that control the right arm’s movement. The red dot with a line extending from it is a symbolic neuron (nerve cell) which extends from the voluntary movement control area of the brain down to the spinal cord, which will eventually control another neuron that drives the muscles. The gray circle is my best guess, based on news reports, as to where Rep. Giffords’s injury is located. It must be above the corpus callosum, seen as a face-down “C” in the left image and as a sort of sling connecting the two halves of the brain in the right image. It may have torn the cables that connect nerve cells to their terminals, and thereby disconnected the brain control cell from the spinal cord (by severing the red line, representing the axon of the nerve cell).

I don’t know if Rep. Giffords will ever return to Congress. No one can know. I do know she has a very difficult road ahead of her. I wish her and her family all the best as she fights back to the very best life she can manage. By all accounts, she is a strong and capable person and so is likely to exceed our expectations in her recovery. I hope I have not caused anyone offense in this analysis. I am convinced that the unfortunate and horrifying attack on Rep. Giffords is a small opportunity for readers of this blog to learn a little bit about brain injuries, and I hope that knowledge will convince readers to support further research in this area.