Seriously, whoever thinks up the tragically unhip names for these things needs to be sent into the theatre as the first line of offense. Obviously this is the biggest news of the day, so we might as well unpack it and see what 538 Refugees readers think about it. 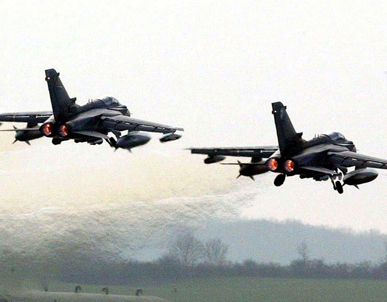 This morning, French, British, Canadian, Italian, and US forces began the task of dismantling Libya’s air defense system after it became apparent that Gadhafi’s forces intended to take Benghazi despite the United Nation’s warning to cease fire. The US is playing more of a support role for other forces in the region.

So it’s happening, right or wrong. Head to the comments section and put in your 2¢.

Mr. Universe is a musician/songwriter and an ex-patriot of the south. He currently lives and teaches at a University in the Pacific Northwest. He is a long distance hiker who has hiked the Appalachian Trail and the Pacific Crest Trail. He is also an author and woodworker. An outspoken political voice, he takes a decidedly liberal stance in politics.
View all posts by Mr. Universe →
This entry was posted in Uncategorized and tagged Benghazi, libya, Muammar al-Gaddafi. Bookmark the permalink.