Joseph Maraachli, born January 22, 2010, suffers from the Classic Infantile form of Sandhoff disease. The thirteen-month-old has been in a vegetative state since last fall, has minimal brain function, and will inevitably die sometime within the next two years. Until earlier this month, Joseph was being kept alive on a respirator in a Canadian hospital in London, Ontario. On February 17, when he developed the need for a tracheotomy, his doctors decided it would be both cruel and futile to subject him to the surgery, and opted to remove him from the respirator, an action planned for February 21 (in a sad irony, the day is celebrated as “Family Day” in much of Canada). At that point an American priest and several “right-to-life” groups, as well as Fox News, intervened at the urging of the child’s parents and managed to have Joseph relocated to Missouri, where he had the tracheotomy performed this week. He will remain under skilled nursing care until his death. 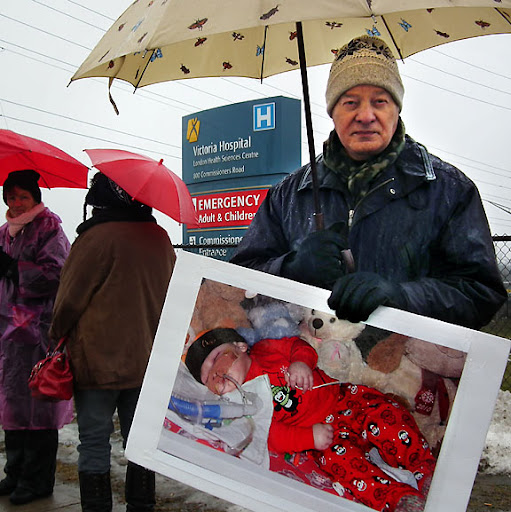 At an early-March rally, a man protests the doctors' refusal to perform a tracheotomy on Maraachli's young son before releasing him into his family's care.

I became aware of this story when it was reported recently at Free Republic, amid much tearful rejoicing and some gloating triumphalism over having defeated the “death panel” that would deprive baby Joseph of his life. Read the first dozen comments or so, and you will see how overjoyed the Freepers were to hear of this baby’s “rescue.”

Now, I know quite a lot about the people who posted those comments. I’ve followed them individually for years, and I understand their political views. They are fierce believers in “cost-cutting”…not just to the subcutaneous level…right down to the bone! But do they have any concern at all for the cost of surgery for this terminally ill, comatose child, followed by keeping him hospitalized on a respirator for a year (possibly two years) until his inevitable death?

This perplexes me. It’s a conundrum, a true enigma. So I tug at the thread a bit:

All these things cause me to ask two questions.

I wish somebody could give me the answers.

And to Baby Joseph…I wish you peace, little one, and an end to your suffering, and comfort for your grieving parents.

Filistro is a Canadian writer and prairie dog who maintains burrows on both sides of the 49th parallel. Like all prairie dogs, she is keenly interested in politics and language. (Prairie dogs have been known to build organized towns the size of Maryland, and are the only furry mammal with a documented language.)
View all posts by filistro →
This entry was posted in Uncategorized and tagged death panels, Health care rationing, Healthcare, Priests for Life, Terminal illness. Bookmark the permalink.