Meet the Press (NBC) — Plouffe, making his first Sunday appearance as one of President Barack Obama’s top White House counselors, the manager of the 2008 Obama campaign will also surely be asked about the president’s prospects for reelection in 2012. NBC also has House 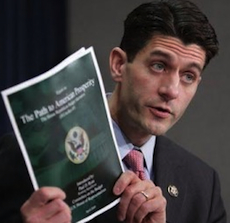 Newsmakers (CSPAN) — Chairman of the Republican National Committee, Reince Priebus of Wisconsin, who will be interviewed by Jonathan Martin of Politico and Jeff Zeleny of The New York Times.

Mr. Universe is a musician/songwriter and an ex-patriot of the south. He currently lives and teaches at a University in the Pacific Northwest. He is a long distance hiker who has hiked the Appalachian Trail and the Pacific Crest Trail. He is also an author and woodworker. An outspoken political voice, he takes a decidedly liberal stance in politics.
View all posts by Mr. Universe →
This entry was posted in Hot Fudge Sunday. Bookmark the permalink.