The problem with winning too many seats in the Senate is that sooner or later you have to defend those seats. Every two years fully 1/3 of the Senate has to be renewed. Each state gets two senatorial seats. This serves to equally represent states with small populations. For example, Wyoming, the state with the smallest population gets two Senators, the same representation as California, the state with the largest population. Since 1913, Senators have been elected to equally represent their states. In fact, there are seven states that have more Senators than representatives. Prior to 1913, Senators were appointed. 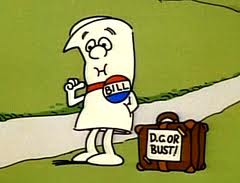 The Senate is probably the most important governing body in the nation. It’s the last pit-stop for legislation consideration on the way to the President’s desk. Some might argue that the Supreme Court is such an important body and I probably could agree that’s true in some circumstances (Gore vs Bush and Citizen’s United come to mind).

Nate gave a really comprehensive review this weekend regarding the chances for a Senate turnover to the Republicans in 2012. We’ve already discussed how Democrats have 23 seats to fill next to the Republicans 10. This lopsided circumstance was due to the mid-2000’s when public sentiment turned back towards the Democrats.

Nate delves into statistical modeling of the Cook Report for several previous Senate races and concludes that a Republican takeover of the Senate in 2012 is likely, but not all that likely. In fact, there seems to be a small chance of Democrat seat pick-ups. We will discuss these in future Senate Seat Series articles.

Let’s look a little further ahead to 2014. The same scenario awaits Democrats where Democrats are expected to defend 20 seats and Republicans will have 13 seats up for election. Of course, 2014 Senate seats are dependent on circumstances happening now. We don’t know who will retire, quit, die, change affiliations, or decide to run for other office between now and then but assuming none of that happens, Democrats will still be defending the bulk of the seats. Here is the 2014 race as it currently stands:

Democrats who may seek re-election

Republicans who may seek re-election

Why does this matter? President Obama’s agenda lives or dies depending on how many seats are held in the Senate in 2012. If he loses the Senate but wins re-election he may well be relegated to ‘Veto’ in chief. President ‘No’. If the Democrats lose more seats in 2014, the President may well be the last bastion of hope against the corporatocracy before 2016. Then it’s anyone’s guess as to what happens.

I don’t think the Senate will change all that much in 2012. It may flip to the Republicans by one vote. The one vote may be the Vice President and that depends upon who wins the next presidential election. That could be whomever President Obama picks as his Vice President or on the offhand chance whomever wins a Republican presidency in 2012.

Mr. Universe is a musician/songwriter and an ex-patriot of the south. He currently lives and teaches at a University in the Pacific Northwest. He is a long distance hiker who has hiked the Appalachian Trail and the Pacific Crest Trail. He is also an author and woodworker. An outspoken political voice, he takes a decidedly liberal stance in politics.
View all posts by Mr. Universe →
This entry was posted in Senate Seat Series and tagged Democratic, Republicans. Bookmark the permalink.