Seth Meyers and President Obama Kill at the WHCA Dinner.

I’m continually impressed at the comedic delivery of President Obama. Last night at the White House Correspondents’ Association dinner was no exception. Sure he’s got some of the best writers but his timing is getting really good. 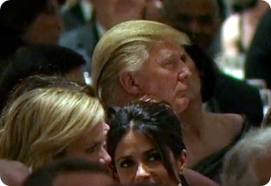 Got served at dinner

Both he and Meyers went after Donald Trump pretty hard. Trump was visibly fuming, particularly during Meyers’ portion of the evening. And Meyers took no prisoners.

Some of Meyers’ more scathing zingers:

Meyers noted that Trump owns the Miss USA Pageant, “which is great for Republicans because it will streamline the search for a vice president.”

I suspect we’ll hear less about the birther issue from this point forward. Although Trump has proven that if anything, he’s predictably unpredictable. I can only hope the media won’t cooperate if he keeps up the rhetoric.

Mr. Universe is a musician/songwriter and an ex-patriot of the south. He currently lives and teaches at a University in the Pacific Northwest. He is a long distance hiker who has hiked the Appalachian Trail and the Pacific Crest Trail. He is also an author and woodworker. An outspoken political voice, he takes a decidedly liberal stance in politics.
View all posts by Mr. Universe →
This entry was posted in Uncategorized and tagged Donald Trump, Miss USA, Seth Meyers, White House Correspondents' Association. Bookmark the permalink.

3 Responses to Seth Meyers and President Obama Kill at the WHCA Dinner.