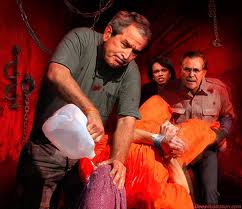 One of the curiosities noted on this blog in the aftermath of the capture and killing of Osama bin Laden (aside from detailing the media’s penchant for providing the platform) has been the previous administration’s defense of and justification for the use of torture, rendition, and other means of ‘enhanced interrogation’ to gather intelligence to use in the ‘war on terrorism’.

They fill the airwaves of the Sunday talk shows and say, ‘See, we were justified in doing these things to these animals in order to protect American citizens’. Welcome to the Jack Bauer Community College of intel and coercion. They would like us to know that torture is a necessary evil that needs to be undertaken in order to protect the American way. I would suggest that these methods actually do the opposite in that they create a mistrust of our intentions with foreign citizens.

Former Bush administrators including Cheney, Rumsfeld, Condoleeza Rice, and anyone running for the Republican nomination for President are quick to claim that these methods of interrogation have yielded actionable intelligence and have aided in finding Osama bin Laden. Actually, no they have not. Leon Panetta has been on record stating that the capture and killing of bin Laden had nothing to do with the waterboarding of any al Qaeda operative. Still they insist that they were justified in doing things to human beings at Guantanamo, Abu Ghraib, and other black sites in order to make us safe even though the knowledge of such actions have probably done more to foment outrage against the United States than any other foreign policy.

Sen. John McCain, himself a victim of torture in Viet Nam, recently came out on the Senate floor and gave a scathing rebuke of the use of torture on record (Hi Maverick, we’ve missed you; welcome back).

It is not possible to know whether torture produces good intel. Many of those subjected to torture provide false intel. Likewise it isn’t possible to know whether other methods of interrogation yield better results because we already default to the use of torture to gather information. We can’t possibly test whether good intel comes from less invasive means if we automatically use the more invasive ones.

But let’s skate by that clinical discussion to the philosophical one. Do we really want to be that kind of people? Do we really want to resort to evil in order to protect ourselves from evil? Is that a winning strategy? Are we winning ‘hearts and minds’ with these techniques or are we just strengthening the enemy?

What distinguishes us from other dictatorships is whether or not we choose to use torture as a means to protect ourselves. I would argue that doing so makes us no better than those who seek to attack us. I would rather our country stand for principle than to succumb to using techniques that compromise those principles in order to preserve them. That, to me, seems antithetical to our existence. There is no such thing as a necessary evil for a necessary evil is still just that; evil. If you believe otherwise…

Mr. Universe is a musician/songwriter and an ex-patriot of the south. He currently lives and teaches at a University in the Pacific Northwest. He is a long distance hiker who has hiked the Appalachian Trail and the Pacific Crest Trail. He is also an author and woodworker. An outspoken political voice, he takes a decidedly liberal stance in politics.
View all posts by Mr. Universe →
This entry was posted in Uncategorized and tagged Abu Ghraib, Al Qaeda, Central Intelligence Agency, Jack Bauer, John McCain, Leon Panetta, Osama bin Laden, Torture. Bookmark the permalink.

2 Responses to Torture is Patriotism