Democrats to Weiner: Get Under the Bus Already

Earlier today Democratic leadership including Minority Leader Nancy Pelosi, DNCC Chair Wasserman-Shultz, DCCC Chair Israel, and former DCCC Chair Van Hollen all called for Rep. Anthony Weiner to resign his seat in the House. At about the same time reports surfaced that Rep. Weiner was checking into a treatment center. Weiner’s office confirmed that he had requested a leave of absence in order to address the problem. Details of where and what treatment were as yet unavailable.

Speculation arose that the situation had changed Friday night when reports that police were investigating communication between Weiner and a seventeen year old girl were revealed. Weiner has denied any impropriety went on in that exchange. But some say that this was the last straw though others say the process of making a unified stand had already been in motion for several days in order to give Congressman Weiner time to resign of his own accord.

Congressional Democrats really had no choice except to throw Weiner under the bus not because of all that has transpired but because of the possibility of what has yet to come to light. The media has been on a feeding frenzy for every lurid tidbit of communication that Congressman Weiner has ever had with anyone and they in turn have been happy to toss chum into the water. While the content has been awkward, embarrassing, and at times humourous (see Bill Maher’s interpretive Facebook rendering. Warning: adult language), there still remains doubt as to its legality.

No one can know for certain; not even Congressman Weiner, who he was communicating with. It’s the Internet. Anonymity is de rigueur. He could have been talking to underage girls or overweight guys in their fifties and as the details keep unfolding, the story just becomes more and more lurid. Imagine the political blowback of not calling for Weiner’s resignation and it turns out that one of these lewd e-mails was to an underage girl (or a fifty year old guy for that matter). The damage to the Democratic Party would be immense and long-lasting 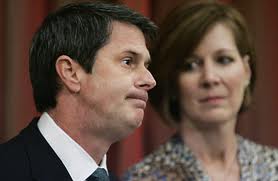 Vitter (with wife) confesses to infidelity with prostitutes

Personally, I don’t think this conversation can be had without bringing up Sen. David Vitter (R- LA) who actually broke the law by engaging with prostitutes and is currently still serving in congress. If we are going to set a moral standard then it should be applied unilateraly. So far it appears that Weiner didn’t break the law, he just behaved badly.

The argument has been made that it is up to the constituency of Congressman Weiner’s District to decide. A recent poll in his district shows that 56% do not want him to resign.

Democratic leaders have taken the right steps and if nothing illegal surfaces then it’s possible that Weiner could keep his seat as Vitter did. Nancy Pelosi still has more punitive measures she could use such as removing him from his committees. New York could eventually dissolve his district in the upcoming redistricting next year (New York will lose two seats due to the 2010 census population changes).

The irony is inescapable that in a party often lacking in strong, outspoken representatives, the one guy who actually showed some cajones is being asked to resign.

Mr. Universe is a musician/songwriter and an ex-patriot of the south. He currently lives and teaches at a University in the Pacific Northwest. He is a long distance hiker who has hiked the Appalachian Trail and the Pacific Crest Trail. He is also an author and woodworker. An outspoken political voice, he takes a decidedly liberal stance in politics.
View all posts by Mr. Universe →
This entry was posted in Uncategorized and tagged Anthony Weiner, Chris Van Hollen, David Vitter, Democratic Congressional Campaign Committee, Nancy Pelosi, Sex scandal, United States House of Representatives. Bookmark the permalink.

1 Response to Democrats to Weiner: Get Under the Bus Already