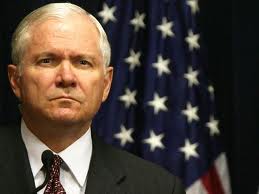 State of the Union (CNN) —  Outgoing Defense Secretary Robert Gates. Gates, who began his government career in the CIA and eventually served under eight presidents, will surely discuss the wars in Afghanistan and Libya and the expected cuts in defense spending. He’s retiring at the end of the month, to be replaced by CIA Director Leon Panetta.

Newsmakers (CSPAN) — Broadcasting live from the meeting of the U.S. Conference of Mayors in Baltimore.

Political Capital (Bloomberg TV) — Indiana Sen. Dick Lugar, a Republican who’s facing a challenge from the right in his reelection bid next year.

Mr. Universe is a musician/songwriter and an ex-patriot of the south. He currently lives and teaches at a University in the Pacific Northwest. He is a long distance hiker who has hiked the Appalachian Trail and the Pacific Crest Trail. He is also an author and woodworker. An outspoken political voice, he takes a decidedly liberal stance in politics.
View all posts by Mr. Universe →
This entry was posted in Hot Fudge Sunday and tagged Chuck Schumer, David Axelrod, Dick Durbin, Dick Lugar, Husain Haqqani, John McCain, Jon Stewart, Lindsay Graham, Mitch McConnell, Robert Gates, Secretary of Defense. Bookmark the permalink.