Commander Mark Kelly for US Senate? 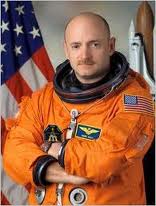 Today Commander Mark Kelly, NASA Astronaut and Husband to US Representative Gabrielle Giffords, announced on his Facebook page his intention to retire from NASA effective October 1st. Kelly flew combat missions from the USS Midway (now a museum in San Diego) during Desert Storm and he has been a NASA astronaut since 1996.

Of course, the question in the minds of many is will Kelly consider a run for political office? Would he perhaps become a proxy candidate for his wife? Giffords has previously stated a desire to run for an Arizona Senate seat. Here is an open ended statement from Kelly’s announcement:

As life takes unexpected turns we frequently come to a crossroads. I am at this point today. Gabrielle is working hard every day on her mission of recovery. I want to be by her side. Stepping aside from my work in the Navy and at NASA will allow me to be with her and with my two daughters. I love them all very much and there is no doubt that we will move forward together. After some time off, I will look at new opportunities and am hopeful that one day I will again serve our country [emphasis mine].

Both Kelly and Giffords have become somewhat American folk heroes; his for service in the Navy and as a Shuttle Pilot and hers for being a champion in the House of representatives and enduring her long fight to recover from the shooting in Tucson. This is a made for television, all-American fairy tale. Both have immense popularity so a political run for the Commander would likely be met with a great deal of enthusiasm.

Kelly would have at least a year to decide to get into the 2012 race. It’s likely that any decision will  be predicated upon Giffords progress.

Mr. Universe is a musician/songwriter and an ex-patriot of the south. He currently lives and teaches at a University in the Pacific Northwest. He is a long distance hiker who has hiked the Appalachian Trail and the Pacific Crest Trail. He is also an author and woodworker. An outspoken political voice, he takes a decidedly liberal stance in politics.
View all posts by Mr. Universe →
This entry was posted in Senate Seat Series, Uncategorized and tagged Arizona Senate, Gabrielle Giffords, Mark E. Kelly, NASA, USS Midway. Bookmark the permalink.