Many critics of the Obama administration often claim that the President has failed to accomplish anything even when he had a super filibuster proof majority in the Senate. Most mistakenly think that he had a sixty vote Senate for the first two years of his first term and that he squandered that opportunity. These critics are often opponents who continually remind us all, through any hot microphone available, that the President did not live up to his campaign promises as though he were supposed to keep them all at once. Others are liberals who are miffed that the President did not use the super majority to push through the items on their personal agenda.

The thing that his critics miss is that President Obama’s administration has to plan their strategy on what is achievable during a particular time frame given the circumstances of the moment. Having a filibuster proof Senate majority was only possible under a specific set of circumstances. They began in April of 2009 when Senator Arlen Specter decided to switch from a Republican to a Democrat. 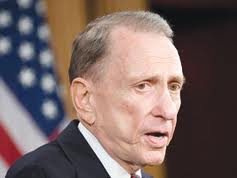 Specter, a long time moderate, said that he was switching back to the Democratic party because of concerns over the direction of the Republican party but conventional speculation is that he was losing in the polls for the Republican Primary to Pat Toomey for not being conservative enough. Specter wound up losing the Democratic primary anyway to Joe Sestak in 2011. But for a while, Specter was the 59th Democratic Senator.

The 60th Senator, Al Franken of Minnesota, was locked up for months in recounts and legal challenges from a very close race with incumbent Norm Coleman. Finally, on July 8, 2009 after eight months of delays, Franken was sworn in as the 60th Democratic Senator (this includes the two independents who caucused with the Democrats). This was the first time Democrats had a filibuster proof majority since 1958.

But six weeks later on August 25, 2009, Massachusetts Senator Ted Kennedy passed away. Technically, it could be argued that the Democrats still had a filibuster proof majority since cloture involves 3/5 of sitting Senators (59 out of 99 is roughly 3/5). But the Senate was in summer recess at the time so it may not have mattered.

One month later on September 25, 2009 Paul Kirk was appointed to fill Kennedy’s vacancy while the special election was going on. Even then this was only because Kennedy himself had requested that the Governor of Massachusetts change the law a week before he died to allow an appointment so the seat wouldn’t be vacant for the remainder of the year. Had he not done so it could’ve been argued that the 60 seat Democratic supermajority would have lasted about six weeks.

On Christmas Eve of 2009, the Senate voted to move forward with the Health Care Reform bill by 60 to 39 votes. As Vice-President Biden noted, it was a big deal.

On February 4, 2010 Scott Brown was sworn in signaling the end of the super-majority.

Depending upon which metric is used, Democrats had a super majority for roughly six months which includes the seven weeks between Franken’s swearing-in on July 8 to Ted Kennedy’s death on August 25 and the four months and nine days between Paul Kirk’s swearing-in on September 25, 2009 to his replacement by Scott Brown on February 4, 2010. This was just barely enough time to pass the biggest and most difficult health care legislation in generations; an event that would likely never have happened under any other circumstances. This also happened under the onslaught of every procedural obstruction the Republicans could put in its path.

President Obama, against advice from many of his advisors, gambled his political capital on this bill and won. And it was a significant battle in what is sure to be a series of battles to come in order to keep the foothold on this particular beachhead. He put the brief super majority to good use and any argument that he squandered it will need to stand next to the impressive accomplishment of the Patient Protection and Affordable Care Act of 2010.

Mr. Universe is a musician/songwriter and an ex-patriot of the south. He currently lives and teaches at a University in the Pacific Northwest. He is a long distance hiker who has hiked the Appalachian Trail and the Pacific Crest Trail. He is also an author and woodworker. An outspoken political voice, he takes a decidedly liberal stance in politics.
View all posts by Mr. Universe →
This entry was posted in Uncategorized and tagged Al Franken, Arlen Specter, cloture, filibuster proof, Health care reform, Martha Coakley, Obamacare, Pat Toomey, PPACA, Scott Brown, Senate, Supermajority, Ted Kennedy. Bookmark the permalink.