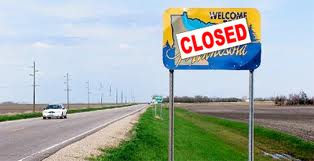 Former Minnesota Governor and current Presidential candidate Tim Pawlenty talks a good game. He likes to tout his record of success as Governor as qualifications for his eligibility to be President. He claims that he made tough decisions as Governor and balanced budgets all without raising taxes, the implication being that he left his office with the state in better shape than when he was inaugurated. But a funny thing happened yesterday in what feels as if it’s going to become routine across the nation: Minnesota shut down because Democrats and Republicans could not reach an agreement over the budget. And there are may Minnesotans who think Pawlenty shares the burden of the blame for the budget being in such bad shape in the first place.

“I’ve got experience in Minnesota as governor, in tackling spending, I’ve balanced budgets…When it comes to getting this federal government spending and deficit and debt under control, I’ve got a record of actually doing that.”

Not so fast. Pawlenty appears to have engaged in some ‘fuzzy math’ and some word illusions. Instead of a cigarette sales tax increase, he called it a ‘health impact fee’ and during his eight years as Governor, property taxes increased by $2.5 billion, a 71% increase over the previous eight years.

“Tim Pawlenty’s philosophy of fiscal management can be summarized as ‘kick the can down the road,’ [He’s] engaging in heavy borrowings and shifting costs to local governments, including school districts, while not confronting the state’s serious challenges.”

Pawlenty also also publicly criticized the American Recovery and Reinvestment Act but quietly took $2.3 billion of the stimulus money. Many critics say that Pawlenty managed to leave Minnesota with a $5 billion deficit with his stealth accounting. Now Democratic Governor Mark Drayton is left to deal with the aftermath with a Republican majority in the legislature. So far, much of what Drayton has done is use veto power. And not just on spending proposals. Republicans have also tried to push through anti-abortion bills and more stringent voter registration rules. Drayton has also proposed taxes which Republican legislators have unilaterally ruled against.

It is not known when budget talks will continue but the legislators are not expected to reconvene until after the holiday weekend.

Mr. Universe is a musician/songwriter and an ex-patriot of the south. He currently lives and teaches at a University in the Pacific Northwest. He is a long distance hiker who has hiked the Appalachian Trail and the Pacific Crest Trail. He is also an author and woodworker. An outspoken political voice, he takes a decidedly liberal stance in politics.
View all posts by Mr. Universe →
This entry was posted in Uncategorized and tagged Arne Carlson, Mark Dayton, Minnesota, Tim Pawlenty. Bookmark the permalink.