As Nate Silver has noted at Five Thirty Eight, the crystal ball is a little murky regarding the recall elections going on in Wisconsin. There certainly is some enthusiasm for the prospects of some of the Republicans being recalled as evidenced by crowds singing ‘Roll out the Recall’ in the rotunda of the capitol building and by the crowds showing up for the broadcast of the Ed Shultz show. 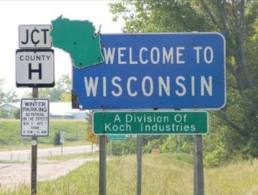 But the polling is unreliable for a couple of reasons. Many of them have been conducted by partisan groups and frankly, a recall of this magnitude is an unprecedented event. Since Oregon inserted the possibility of a recall into their laws one hundred years ago, only twenty recalls have ever been conducted at the state level. Nine of them are happening in Wisconsin all at once. There simply isn’t a lot of historical data to make an accurate prediction. So what does it mean if  given the circumstances of the outcome of today’s contests?Essentially there are three possibilities: Democrats achieve a total or partial shut-out; the recalls are unsuccessful and things stay the same, or in a worst case scenario, one or both remaining Democrats are recalled. Democrats only need three seats (and to not lose one of the other two that are being challenged on the 16th) in order to shift the balance in the Senate. At the moment, this seems the most likely outcome since most sources think Randy Hopper and Dan Kapanke will lose tonight. The rest of the night’s races are too close to call within a generous margin of error.

But Democrats could have a good night tonight but lose a seat on the 16th in which case nothing much will change except the names on a couple of the nameplates in the halls of the capitol. And Governor Scott Walker can probably breathe a little easier about the prospect of his own recall next January.

But what if the Democrats run the table tonight? If that happens, Not only will it be a harbinger of doom for Walker but I suspect that every Republican in Washington DC will not be looking forward to the 2012 elections. This will be galvanizing evidence that people’s voices can be heard despite attempts to circumvent them.

Does this mean that Democrats will be off the hook in 2012? Maybe, but populist anger is currently pretty high with both parties particularly after the whole debt ceiling debacle. However, a CNN poll out today show significant drops in favourable perceptions and significant increases in unfavourables for Republicans such as John Boehner and Mitch McConnell while Democrats Harry Reid and Nancy Pelosi remain at their relatively same (also low) levels. If I had to put money on the outcome on the national races after tonight’s results in Wisconsin, my money says the Republicans are going to get dinged pretty hard in 2012. And today will be remembered as the day of the Badger Revolution.

Mr. Universe is a musician/songwriter and an ex-patriot of the south. He currently lives and teaches at a University in the Pacific Northwest. He is a long distance hiker who has hiked the Appalachian Trail and the Pacific Crest Trail. He is also an author and woodworker. An outspoken political voice, he takes a decidedly liberal stance in politics.
View all posts by Mr. Universe →
This entry was posted in Uncategorized and tagged Dan Kapanke, Mitch McConnell, Randy Hopper, Recall election, Wisconsin. Bookmark the permalink.