A Soldier’s Duty; A Citizen’s Responsibility 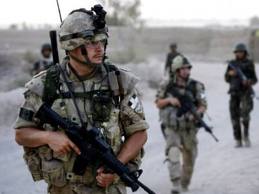 I was thinking the other day when I was reflecting on 9/11 about America’s place in the world. Specifically, I was thinking about our military. Finest, most well-trained bunch of people in the world. Of course, for some the military is the only way to succeed. Education may be unavailable to them, jobs may be scarce, opportunities may not be available for them and consequently, the military is their only viable choice. And the military isn’t a bad choice. There are all kinds of benefits from serving. Free education, medical care, job placement; the list is extensive. But the risk is greater. All you have to do to get these benefits is be willing to take a bullet or step on an improvised explosive device to get them.

It only seems fair that we should take care of our warriors but it also seems like a Faustian bargain. You can have the good life as long as you don’t get shot. Something about that bothers me.

I’m lucky to have been born during a time of lasting peace. Too early for Vietnam and too old for any other conflict. I did try to enlist in the Air Force once but as a teenage father, they turned me down. I hear the military has since lowered its standards for admission.

Tom Brokaw called the World War II generation the ‘Greatest Generation’. I think he was correct in that the world was united in defeating fascism and thwarting Japan’s imperial plans for world domination. Never was there a time when the people of this planet were so in agreement. I wish we lived in that era today but, unfortunately, we seem to be more at odds than ever.

General Dwight David Eisenhower (notice that I purposely didn’t call him President) warned us of the Military Congressional Industrial Complex. That era is upon us. America’s military is the largest in the world. We spend more on our military than most countries. I would argue that we’ve become the world’s police force. Got a problem? Have resources we want? We’ll be right there to kick somebody’s ass. We’ll throw the best trained, desperate, uneducated, poor, maybe illegal alien, people at you. Because you’re obviously a threat to the American way of life.

Oh yeah. The American way of life. You need to enlist in the military to have access to that.

I guess the point I’m getting around to making is that our military is the finest in the world. They put themselves in harm’s way for our benefit every day. They do their duty without question. They will die to protect our freedom of belief, speech, religion, and other things that we take for granted. That I am able to communicate this thought is a tribute to their efforts. Hell, I could’ve been born in Darfur. But who questions the deployment of our military?

Over 4,700 American soldiers have died in the two longest wars to date in the middle east. Those soldiers paid the ultimate price for me to be able to post my opinion here. They did their duty unflinchingly; without question because we told them it was necessary to protect us. To preserve our freedom.

But this isn’t World War II. Yes our soldiers serve valiantly and answer the call to duty but we as citizens have just as much of a responsibility to our soldiers. We should be equally responsible for sending them into harm’s way. And that requires being politically involved. George W. Bush said we needed to invade Iraq. He was wrong yet we re-elected him for a second term. He sent our troops into harm’s way on a false premise and we let him. I, for one, will forever regard this moment in history as a dark time.

I hope that we can redefine the military industrial complex. I hope we can envision an America that promotes education and health for everyone. Our military is the best. They serve bravely. It is our obligation to ensure that we make the right decisions and vote for the right politicians who deploy the military. To do otherwise is an insult to them and their families.

They put themselves in harm’s way for our benefit. We owe it to them to vote for politicians who make responsible decisions for their deployment. We failed them this last time. Let’s not do that again.

Mr. Universe is a musician/songwriter and an ex-patriot of the south. He currently lives and teaches at a University in the Pacific Northwest. He is a long distance hiker who has hiked the Appalachian Trail and the Pacific Crest Trail. He is also an author and woodworker. An outspoken political voice, he takes a decidedly liberal stance in politics.
View all posts by Mr. Universe →
This entry was posted in Uncategorized and tagged Dwight D. Eisenhower, George W. Bush, Military–industrial complex, Tom Brokaw, United States. Bookmark the permalink.