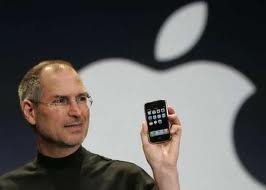 The biggest news of the week was obviously the passing of Apple founder and CEO Steve Jobs. It doesn’t matter whether you grew up using Macs or PCs, you’ve been influenced by Apple products. The mouse, windows, the operating system whose rules we all take for granted, the touchpad on your smart phone; many of the things we do in our everyday lives that just seem second nature were a result of the influence of Steve Jobs.

People my age remember a time when computers occupied spaces the size of most living rooms in their houses. IBM thought personal computers were a Jetsons-style pipe dream. Steve Jobs didn’t accept that and he provided a machine that bucked that preconception.

Bill Gates went for a different, business audience while Steve Jobs went after a creative niche. And it has brought us lots of creative results; Pixar, Photoshop, music recording, and ‘There’s an App for that’. My smartphone can function as a level and a guitar tuner. How cool is that?

Jobs has been referred to as a modern day Thomas Edison and I think that’s fair. Mac heads like me (this is being written on an iMac) appreciate being enabled by Apple products. In all fairness, Apple has had some duds which I have been subjected to (Mac IIci). And I still don’t have an iPhone due to the shotgun marriage to AT&T. On the other hand I have a Powerbook 180 from the early nineties that still works. It’s obsolete, obviously, but it still works and belongs in a museum.

You always had the idea that Jobs was like you; that he wanted computers to be your tool and not the other way around. As a result, Jobs has been one of the most beloved CEOs ever. Was he an Edison? Perhaps. Was he a visionary? Most certainly.

He will certainly be missed.

Mr. Universe is a musician/songwriter and an ex-patriot of the south. He currently lives and teaches at a University in the Pacific Northwest. He is a long distance hiker who has hiked the Appalachian Trail and the Pacific Crest Trail. He is also an author and woodworker. An outspoken political voice, he takes a decidedly liberal stance in politics.
View all posts by Mr. Universe →
This entry was posted in Free Forum Friday and tagged Apple, Bill Gates, IBM, iMac, iPhone, Mac, Steve Job, Thomas Edison. Bookmark the permalink.