The Illusion of Meritocracy 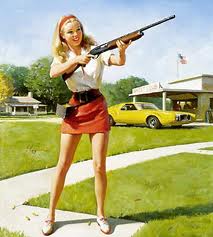 PULL! Hot Girl with a 12 gauge and an Avanti in the driveway. God bless America.

We’ve been brought up to believe it, right? You work hard, go to school, and eventually you get your just rewards. The American dream. 2.2 kids a dog and a cat. Only now, that dream seems so out of reach. We’ve just been told to believe that it’s true. After all, it worked for our parents. They had what was once known as a career (well at least Dad did. Mom made apple pies and took us to soccer practice) and then they retired with their pensions and Social Security. Don’t we deserve a shot at the brass ring? This is America, after all. We defeated Nazism and brought about the industrial revolution, right? Baseball, hot dogs, apple pie, and Chevrolet. Opportunity? Well, looks like it’s been foreclosed upon.

I’ve previously and repeatedly posed the question regarding the political chasm between liberal Democrats and conservative Republicans. Specifically, the question goes something like, ‘why do conservatives vote for policies and politicians that are contrary to their own self- interests?’ or words to that effect. And I am continually baffled by this apparent lack of perception about making choices that; to me anyway, are not only so self evidentially bad for them individually but also for the rest of us collectively.

I can come to only a few conclusions. The first is the one most often recited by the far left and it basically boils down to ‘what a bunch of idiots’ argument. The second is genuine unawareness. The third is just obstinance. And the fourth is just that we a being completely fucked by the rich. Openly, unashamedly, soaked by the wealthy. I’m inclined to believe that it is a combination of all of the above but that, ultimately, it’s largely the latter.

This is where the sentiment of Occupy Wall Street lies. We don’t believe the American Dream exists anymore. At least not for most of us. It did exist after World War II for a few years but then some greedy bastards figured out how to steal it from the rest of us. Now Wall Street is befuddled that we’re protesting. Yeah, I get a little testy when I’m being screwed without being kissed. Funny about that.

My concern is that capitalism is unsustainable. Capitalism is a faith based initiative in that those who faithfully adhere to laissez-faire ignore the evidence that unfettered capitalism without regulation is destroying the world. It has precluded the idea of socialism. Socialism is bad. It’s the new communism. The red scare of the new century. We must avoid socialism at all costs because we won’t be able to get filthy rich otherwise.

Your EPA is getting in the way of profits. Your wage requirements are impeding the bottom line. Your health care is costly. We would rather use you until you are no longer healthy and then you’re welcome to die (so long as we don’t have to pay for the funeral).

The Reckoning is coming. It will not be pretty.

Mr. Universe is a musician/songwriter and an ex-patriot of the south. He currently lives and teaches at a University in the Pacific Northwest. He is a long distance hiker who has hiked the Appalachian Trail and the Pacific Crest Trail. He is also an author and woodworker. An outspoken political voice, he takes a decidedly liberal stance in politics.
View all posts by Mr. Universe →
This entry was posted in Uncategorized and tagged American Dream, Chevrolet, Meritocracy, Nazism, Social Security, United States, Wall Street, World War II. Bookmark the permalink.

1 Response to The Illusion of Meritocracy