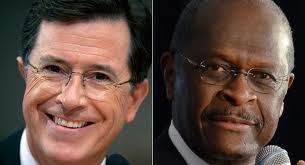 Will the real Herman Cain please run for President?

Since the beginning of the political season, the creative people at Comedy Central’s hit shows, The Daily Show with Jon Stewart and The Colbert Report have had a great deal of material to work with. Stephen Colbert, in particular, Has taken his brand of political satire to the extreme as he began to poke holes in the Citizen’s United decision and the resultant formation of Super PACs. There has even been a book written about Colbert’s form of political satire by Penn State University professor Sophia A. McClennan entitled, America According to Colbert: Satire as Public Pedagogy.

For months Colbert, in his faux conservative character, has been teaching his audience about the absurdities of the Citizens United decision (which turns two years old this Saturday) and the consequences of allowing unlimited and secret funding of political candidates through Super PACs. Colbert formed his own Super Pac in response and even put out a few quasi-political ads.

But now the game has risen to a whole new level. Soon after the New Hampshire primaries a poll in South Carolina came out and it had a surprising result on it. Stephen Colbert was polling ahead of John Huntsman. It’s not so much surprising given that Colbert is from South Carolina but the fact that he was ahead of a legitimate presidential candidate was. There is even speculation that it is why Huntsman dropped out of the race yesterday, though many believe that Huntsman was never in the race to win but to introduce himself in preparation for a run in 2016.

So last Thursday on The Colbert Report, Colbert transferred his Super PAC to Jon Stewart and declared that he was forming an exploratory committee to run for President of the United States of South Carolina (whatever that means). Why? Because under FEC regulations Super PACs have to report their donors to the FEC; they cannot give money directly to candidates; and they can’t coordinate with the campaigns — they must be independent. The problem is, Colbert is two and a half months late for getting on the ballot in South Carolina. His solution to this is brilliant. Last night Colbert pointed out that Herman Cain, who is no longer in the race, IS still on the ballot in South Carolina and therefore a vote for Herman Cain would be a vote for Colbert (Herman Cain is actually in on the joke). This may be the unconventional candidate Herman Cain was alluding to endorsing last week.

But the point isn’t that Colbert is running as a joke to increase his viewership or his wealth, the point is to illustrate how our political process has become a joke. Colbert made this abundantly clear in an uncomfortable interview on ABC’s This Week with George Stephanopoulos. He pointed out to Stephanopoulos that money is now free speech and the more money you have the more speech you get to have.

Colbert has done the American people a service by making the whole political circus understandable through his comedy and he’s thrown off the veil of secrecy that politicians like Karl Rove and others have used to abuse federal voting laws to essentially buy political office.

Keep in mind that South Carolina is an open primary so Democrats and independents can vote in the Republican race. Could we see a Herman Cain (aka: Stephen Colbert) actually place? Will it have an effect on Ron Paul’s strategy of drawing out Democrats and independents in South Carolina’s open primary? Could possible Ron Paul supporters (aka: disaffected Republicans, Democrats, and independents who don’t wish to vote for anyone else on the Republican ticket) be lured away by Cain/Colbert? Could the Herman Cain Train be resurrected? Get the popcorn, it’s gonna be fun.

Mr. Universe is a musician/songwriter and an ex-patriot of the south. He currently lives and teaches at a University in the Pacific Northwest. He is a long distance hiker who has hiked the Appalachian Trail and the Pacific Crest Trail. He is also an author and woodworker. An outspoken political voice, he takes a decidedly liberal stance in politics.
View all posts by Mr. Universe →
This entry was posted in Uncategorized and tagged Citizens United, Colbert Report, Comedy Central, Daily Show, George Stephanopoulos, Herman Cain, Jon Stewart, Mitt Romney, South Carolina, South Carolina primary, Stephen Colbert, Super Pac. Bookmark the permalink.