Mitt Got Lucky; Rick Learned a Lesson, and Newt is Pimping for Mitt 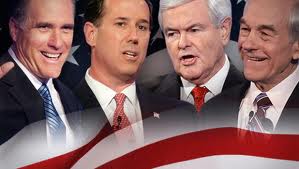 Who will be left standing?

Rick Santorum learned some hard lessons on Super Tuesday. And Mitt Romney got lucky. Let’s face it, this ain’t Mitt’s first time at the rodeo but he’s acting like it is. In reality, Super Tuesday could’ve turned out much differently if a few minor details had been different.

For example, Ohio could have turned out much differently. Had Rick Santorum’s campaign been better prepared (and I would argue more confident that he would get this far) and registered in all the precincts in Ohio, it’s possible we would be looking at a Santorum victory. But as it stands, his campaign failed to qualify in three key precincts giving Mitt Romney a squeaker of a win.

The other candidates should have been smarter about Virginia as well. Both Santorum and Gingrich failed to make the ballot there leaving the contest as a battle between Romney and Ron Paul. Does that matter? Well, yes it does. Ron Paul got 40% of the vote in Virginia to Romney’s 60%. That would be great for Romney under any other circumstance but what it indicates here is that Romney never really made the sale to Virginians. Even if those Ron Paul voters weren’t actually thrilled with Ron Paul, their vote for him means they weren’t thrilled with Mitt Romney either.

And what of Newt Gingrich? Sure he won Georgia. No surprise. Losing Georgia would have been the surprise. The implication here means Newt gets a few southern states and beyond that, third place if he’s lucky. And he hasn’t been all that lucky. Ron Paul consistently beats Newt enough to make him look pretty silly. Santorum’s campaign has called for Newt to bow out. The math says he should. Sure, Newt could win next week’s contests in Alabama and Mississippi but they won’t even get Newt close to the delegate count necessary to win under any hypothetical mathematical calculation. What does that mean if Newt stays in the race?

Or could he? Maybe Adelson is buying into a contretemps in order to disable the anti-Romney camp. It makes sense: Newt’s a loser, but he sucks votes from Santorum and Paul, and Adelson has been known to be okay with Mitt as a second. Why not fund a battle on multiple fronts if you can afford it? Newt Gingrich as a paid spoiler. Who’da thunk?

Super Tuesday may have gone to Mitt but there will always be an asterisk next to his victory. This was no decisive win for Romney even though he won a majority of the states. The delegate math just doesn’t add up. It’s still theoretically possible for someone else to reach the 1,144 threshold for now. That could change pretty soon (regular 538Refugees readers know that I’m referring to March 17th but I’m recalculating. Note: I’m not too far off that estimate).

Many of the later campaigns will be strict winner-take-all contests so the results could wind down precipitously. Much of the calculations will be a result of the candidates who choose to withdraw or decide to remain in the race. If Gingrich withdraws, it’s possible that you could see evangelicals rally around Santorum. Ron Paul isn’t going to withdraw because he has an agenda separate yet relevant to the Republican party. Santorum has won too many delegates to stop challenging Mitt Romney.

That poses a problem for Romney: The inevitability question is over. It appears that the ‘Anyone-but-Romney’ candidate is alive and well. Even after Super Tuesday.

Mr. Universe is a musician/songwriter and an ex-patriot of the south. He currently lives and teaches at a University in the Pacific Northwest. He is a long distance hiker who has hiked the Appalachian Trail and the Pacific Crest Trail. He is also an author and woodworker. An outspoken political voice, he takes a decidedly liberal stance in politics.
View all posts by Mr. Universe →
This entry was posted in Uncategorized and tagged Mitt Romney, Newt Gingrich, Ohio, Rick Santorum, Ron Paul, Super Tuesday. Bookmark the permalink.