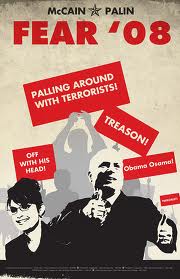 An hommage to Sheperd Fairey

We tiny humans are a curious evolutionary accident. In nature, many species bear their offspring and those animals have mere seconds to get on their feet and start running with the herd. Otherwise, they are dinner for some other type of animal lurking nearby. But human babies require years of nursing and attention of at least one parent before they can function on their own and even a decade or more before they can operate as autonomous individuals in their cohort. This would seem to be an evolutionary disadvantage save for the fact that humans have evolved as tribes that protect mothers and newborns from predators.

But one thing most species have in common is fear. Being distrustful of things has probably ensured our survival. It’s why most of us stand back from the edge of the cliff. Pain is also a factor. We learn from painful experiences not to do certain things. Our fear of experiencing that pain again helps us avoid those things that are potentially harmful to us. That little warning voice coming from the amygdala in our brains has probably ensured our survival as a species.

There are also some negative effects as well. Racism is likely a fearful response towards people who do not look like you. That may have been useful long ago to protect your tribe from pillagers but that trait isn’t terribly useful now even though we recently waged a world war based on a philosophy of a ‘master race’ and in our own country over whether people with dark skin were less than human. Fear is indeed a powerful motivator.

Fear works in religion as well. In parts of this nation it is a carrot vs. stick approach; either you believe that Jesus Christ is your soul (sole) redeemer or you burn in hell for all eternity. Sure, as a person of free will you can choose not to believe in this herd mentality, but what if you’re wrong? Eternal damnation sounds pretty harsh. This concept is known as Pascal’s Wager put forth by philosopher Blaise Pascal back in the eighteenth century. It is the central point of why people are more motivated by the fear of the unknown than they are by thinking differently. Not many ever stop to think of the alternative: what if you’re right?

Fear is heavy factor in politics (you knew I’d get there, didn’t you?). The current meme in politics is actually a recycled one. It used to be the ‘red scare’ back in the post WWII days only then it was communism. Now it’s just communism disguised as socialism. It calls for a war on [insert political dogma you fear is threatened here].

In Wisconsin, the perception is that unions are bad. Perception in politics is everything. If you can convince people to fear something, whether that fear is grounded in fallacy or not, then that fear keeps them from believing it. Scott Walker looks as though he will survive his recall because of bazillions of dollars of outside money pumped into the state to by ads which sole purpose is to stoke the fears of the very people that Walker’s tenure as Governor will actually harm in the long run. But better to be safe than sorry, right?

The 2012 presidential election is five months away but it’s a fair bet that there will be and actually already are a slew of ads designed to stimulate the fear response of the populace. “If Barack Obama is re-elected the world is doomed”, or “If you elect Mitt Romney , you’ll be a subject of the rich and corporations”. That last one is actually true, by the way. Now that Citizens United (an ironic categorization) has passed, there will be no escape from having your fears stoked. It’s a good time to be in the media business making campaign commercials.

Republican PACs will spend billions creating a perception that President Obama is either ineffective, inexperienced, responsible for the collapsed economy (even though they know it is recovering and it actually wasn’t his fault), isn’t even an American citizen, isn’t really a Christian, doesn’t believe in capitalism and is against free enterprise, and is probably responsible for the Holocaust. None of these things are true but as Pascal wagered, what if you’re wrong?

Until we collectively face our fears we will never advance as a society. As long as a majority of free people under a democracy choose not to face their fears then we really aren’t much different than people under autocratic or theocratic rule. Instead of a dictator or a God, we are governed by our fears and those who know how and can afford to manipulate them.

A once very popular president said, “The only thing we have to fear is fear itself“. Those words taught us to be a fearless nation for a brief period and we collectively dispensed with a very bad philosophy (also based on fear) that had taken hold in the world.

It seems that every political cycle is the most important election in history from some pundit’s perspective. Most people agree that 2008 was a pretty landmark election for all the obvious reasons. I would argue that 2012 is the most important election for all the reasons that aren’t obvious. We have an opportunity as a nation to advance in a direction previously unknown to us. We have opportunities to actually become a democracy with a big ‘D’. To accomplish things that will benefit all people not just a few of the most influential.

Will people give in to their bought and financed fears in this election cycle? Will we take the safe bet over the hopeful change? Will we re-elect a leader who has so far brought about the change we demanded in 2008? My fear is that we will choose not be that nation. And that would be sad.

Mr. Universe is a musician/songwriter and an ex-patriot of the south. He currently lives and teaches at a University in the Pacific Northwest. He is a long distance hiker who has hiked the Appalachian Trail and the Pacific Crest Trail. He is also an author and woodworker. An outspoken political voice, he takes a decidedly liberal stance in politics.
View all posts by Mr. Universe →
This entry was posted in Uncategorized and tagged Blaise Pascal, Fear, Pascal's Wager, Scott Walker, Wisconsin. Bookmark the permalink.