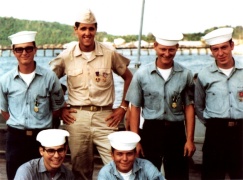 In the 2004 Presidential campaign the political gloves came off, so to speak, when a group of Vietnam War veterans was enlisted by a Republican special interest group (known as a 527 or the equivalent of today’s SuperPac) released negative campaign ads calling into question the validity of John Kerry’s war record and his subsequent protest against the Vietnam war. They essentially painted Kerry’s service as dishonourable.

None of it was true, of course. Kerry served on river patrol in what was called a ‘swift boat’. And he served admirably going in to attack the enemy when called upon to do so. He was decorated for his service. But Kerry made one mistake in that he failed to defend himself from the attack ads. Whether he didn’t want to accuse fellow veterans of lying or whether he thought it was just an absurd issue that everyone would see through, it didn’t matter. Kerry failed to define himself and in doing so he allowed others to do it for him in the public’s eye. He was what is now called in modern political terms, ‘Swiftboated’ much to the chagrin of veterans who served during that period. And he lost the 2004 election possibly because of it.

Critics have begun to accuse the Obama campaign of doing the same thing to Mitt Romney over the questions about his years and service at Bain Capital. Some are calling it swift boating or ‘Swift-Baining’ or ‘Swiss Boating’ referring to Romney’s Swiss bank accounts. But is it really the same thing that happened to John Kerry?

None of the accusations levied on John Kerry by the Swift Boat Vets has ever been proven to be true. Granted, some of those bets may believe them to be true but there is a big difference between fact and belief. So Swiftboating, for Democrats anyway, will always be synonymous with a personal attack on someone based on lies.

And it wasn’t the first time nor would it be the last. Multiple amputee Max Cleland was unseated from his Senate seat in 2002 by ads from his opponent Saxby Chambliss portraying him as unpatriotic and accusing him of voting against the Homeland Security Act (he was opposed to certain measures of the bill). The ads showed Cleland juxtaposed with pictures of Osama bin Laden and Saddam Hussein. They were taken down after protests including fellow Republicans John McCain and Chuck Hagel, both Vietnam War vets. But the damage was done.

More recently, Republican Representative Joe Walsh of Illinois has accused double amputee and Iraq war veteran Democrat Tammy Duckworth of not being a ‘true hero’ because she makes her military service central to her campaign for his House seat. Duckworth has not made that much of an issue of her service in her campaign yet Walsh, who never served in the military, has mocked her on more than one occasion. The tactic will likely back fire on Walsh. In fact guitar player for the rock group the Eagles, also named Joe Walsh, has publicly endorsed Duckworth in response to the attacks despite the fact that he isn’t from her district.

The Obama Campaign released the now famous ‘America the Beautiful’ ad with Mitt Romney’s off key singing of the song over excerpts of articles pointing out Romney’s unanswered questions regarding his tenure at Bain and his offshore bank accounts. Many think the ad has had a devastating effect on Romney much like the ‘Daisy’ ad had on Barry Goldwater in the sixties.

The ad ran only once during prime time television but it effectively guaranteed Lyndon Johnson the Presidency.

But was the Obama campaign’s strategy of bringing up Romney’s tenure at Bain Swiftboating? Was pointing out the discrepancy of Romney’s claim to not have been involved with Bain while he was working for the 2002 Olympics untrue? Is pointing out that everyone else who has ever run for office including Romney’s own father have released multiple years of tax returns a lie? No, If Romney claims to be qualified for the top job in the nation based on his business record and acumen then he kind of had this coming. The only similarity between Romney and Kerry is that Mitt didn’t seem to see it coming and was unprepared to respond to it. Swiftboating doesn’t seem quite right for Mitt’s situation given that he never served in the military even though his draft number was called (he got a deferrment to do Missionary work for the Mormon Church in France). No, given Mitt’s background ‘Yachtboating‘ seems more appropriate.

Even prominent Republicans both in politics and the political media punditry are lining up to tell Romney to bite the bullet and release the tax returns. George Will, as staunch a conservative as they get, has declared that Romney’s campaign may have suffered irreparable damage by not doing so. Others have said that Romney’s unwillingness to release the returns are indicative of something to hide, whether it be some outrageously low tax rate or other forms of wealth in those offshore accounts. Whether any of that is true is almost immaterial now. The damage has been done.

Mr. Universe is a musician/songwriter and an ex-patriot of the south. He currently lives and teaches at a University in the Pacific Northwest. He is a long distance hiker who has hiked the Appalachian Trail and the Pacific Crest Trail. He is also an author and woodworker. An outspoken political voice, he takes a decidedly liberal stance in politics.
View all posts by Mr. Universe →
This entry was posted in Uncategorized and tagged Bain Capital, Chuck Hagel, Joe Walsh, John Kerry, John McCain, Max Cleland, Mitt Romney, Romney tax returns, Saxby Chambliss, Swift Boat Vets, Swiftboat, Swiftboating, Tammy Duckworth, Viet Nam War Veterans, Vietnam War, Yahctboating. Bookmark the permalink.