or … Dreams from My Father

On Monday, April 11, 2011, “Mitt” Romney announced the formation of an exploratory committee to help him pursue the Republican nomination for President of the United States.

I have a theory that all modern politics can trace its direct lineage to the 1968 Presidential election.

In 1967, Michigan Governor George Romney announced his intention to run for the Republican nomination for President. George Romney had a past that would seem to both qualify him, and disqualify him, to be President. He was born in 1907 in Mexico, so if he had been the successful candidate, it’s almost certain that questions regarding his eligibility — with or without a Certificate of Live Birth — would have arisen. His family were members of the Church of Jesus Christ of Latter Day Saints (“Mormon”). The Fourth Prophet of the Church, Wilford Woodruff, proclaimed that the church was opposed to polygamy in 1890. Five years later, Utah became a state, its path to statehood having been cleared by Woodruff’s prophecy. Many faithful LDS adherents disagreed with this, and fled to Mexico, Canada, Brazil and other countries where polygamy was not necessarily legal, but at least, overlooked.

In 1910, when the Mexican Revolution threatened the Romney family, they moved from Mexico to Idaho and then to Utah. George Romney graduated from the University of Utah and moved his family to Michigan. Mitt Romney was born in Michigan on March 12, 1947.

George Romney rose rapidly in the ranks of industrialists, becoming chairman and CEO of American Motors in 1954, shortly after its formation as a merger of the Nash and Hudson nameplates. (AMC struggled throughout its 30 year existence, and eventually became the Jeep-Eagle Division of Chrysler in 1985.) He helmed AMC until 1962, when he fought for, and won, election as Governor of Michigan. Mitt was then 15.

Governor George Romney was a serious contender for the Republican Presidential nomination in 1968. Recall that the Republicans had suffered a crushing and humiliating defeat with Arizona Sen. Barry Goldwater as their standard-bearer in 1964. The Republicans were in disarray and few looked strong enough to unseat incumbent President Lyndon Johnson. The nation was deeply divided by the Vietnam War. Then, in March 1968, President Johnson made a surprise announcement that he would not seek re-election. The assassinations of Martin Luther King and Robert Kennedy later that year, and riots in most major American cities, further destabilized the political situation.

Our magnificent economy, which offers an impoverished and hungry world the only model that can head off greater deprivation and unprecedented famine, is being systematically jammed by inflation.

The richest nation in the world is in a fiscal mess.

As we have drifted away from principle at home, we have undermined the foundation of our position in the world.  Once a beacon of hope for people everywhere, America is now widely regarded as belligerent and domineering.

We are mired in an Asian land war which sacrifices our young men and drains our resources, with no end in sight.  Time and again we have been taken toward the mountaintop of hope only to fall back into the crevices of sickening reality.  False optimism and lack of candor on the part of our leaders have confused our citizens and sapped their resolve.

Our foreign policy has no clear positive purpose.  NATO and the United Nations are in disarray, subversion threatens Latin America, and the have-not nations are losing ground.

This has a familiar ring — substitute “recession” for “inflation” and “the Islamic World” for “Latin America” in the above position paper. As I said, everything traces back to 1968. 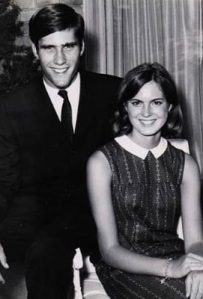 Mitt Romney and Ann Davies as high school sweethearts, about 1965.

After a career in finance and corporate governance, most notably at Bain Capital, he was asked to step in and fix the horrible financial and ethical mess that had been made of the 2002 Salt Lake City Winter Olympics. The 2002 Olympics were a tremendous success, even more so because they were the first major international event held in the United States following the September 11, 2001 terrorist attacks on the World Trade Center, Pentagon, and the abortive attack on the Capital which ended in a field in Shanksburg, Pennsylvania. 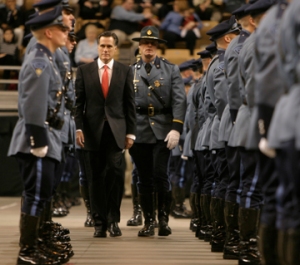 In November 2002, Mitt Romney was elected Governor of Massachusetts, continuing a strong tradition in that state of electing moderate Republicans to statewide offices (Sen. Edward Brooke, the first African-American Senator since Reconstruction and the first African-American elected to the Senate by popular vote; Gov. William Weld; Sen. Scott Brown).

As Governor, Romney spearheaded a massive health care reform package that has since been dubbed “Romneycare”. The Massachusetts health care reform, on which PPACA has been modeled, was passed and signed by Governor Romney in 2006. Only Massachusetts and Utah have a currently functioning insurance exchange as provided for in PPACA. While the Massachusetts plan differs from PPACA guidelines in key respects, it is likely that Massachusetts will be the first state to have its insurance exchange certified under the PPACA provisions. (That is, if PPACA survives the current legal challenges, which seems likely.) You can rest assured that if Romney is the front-runner or nominee, Massachusetts’ certification will be announced with great fanfare by the Obama Administration at a time calibrated to produce maximum discomfort for Gov. Romney. 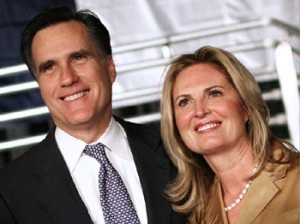 Mitt and Ann Romney, photographed at a rakish yet dynamic angle for maximum visual effect.

In 2007, following in his father’s footsteps, Mitt Romney announced his candidacy for the Republican nomination for President of the United States.

Romney’s 2008 candidacy was a strong one. He was an early front-runner, but often seemed “robotic” and ill-at-ease on the campaign trail. In one famous incident, a Boston Globe profile meant to cast him as a cool-headed leader who solved problems under pressure had the undesired effect of angering hundreds of thousands of dog lovers.  Time’s account of the 1983 family vacation incident:

The incident: dog excrement found on the roof and windows of the Romney station wagon. How it got there: Romney strapped a dog carrier — with the family dog Seamus, an Irish Setter, in it — to the roof of the family station wagon for a twelve hour drive from Boston to Ontario, which the family apparently completed, despite Seamus’s rather visceral protest.

Amid questions about Romney’s judgment and character, particularly centered around his LDS faith, John McCain eventually won the 2008 Republican Presidential nomination. In what was widely felt to be a knock on Romney, McCain passed over Romney as his vice-presidential running mate, selecting a then-unknown-Governor of Alaska, Sarah Palin.

Now it’s 2011, soon to be 2012, and Mitt Romney is running again. Generally regarded once again as the front-runner, he has racked up significant standings in April 2011 straw polls or opinion polls in the early caucus/primary states of Iowa (Huckabee 21%, Romney 14%), New Hampshire (Romney 27%, Trump 21%), Nevada (January: Romney 31%, Palin 18%, Gingrich 17%). He is profoundly weak in South Carolina, coming in a distant fourth to leader Mike Huckabee: Huckabee 23%, Gingrich 11%, Bachmann (!) 10%, Romney 8%. Note the absence of Tim Pawlenty from any front-runner position in these polls.

A February Public Policy Poll stacked the potential Republican nominees against President Obama. Relative to Obama, Gov. Huckabee scored the best at 47% Obama, 44% Huckabee (we’ll call this a –3). Romney was next at 46/41 for a –5. Gingrich and Rep. Ron Paul were tied at –9, and Palin, Trump and Jeb Bush vs. President Obama produced a double-digit lead for the incumbent (–12 to –14).

One of our other contributors has noted that if you could roll Romney’s good looks and experience, Huckabee’s down-homeyness, Palin’s bravado, Gingrich’s cunning, and Rand Paul’s libertarianism into one candidate, you might have a chance of beating Obama.

Evangelicals may never warm to Mitt Romney. His LDS faith is still suspect to some. His support of Obamacare before it was Obamacare may well be used against him in the 2012 campaign no matter how much he tries to distance himself from that achievement. Still, given the shallow bench of contenders, he may well be the strongest candidate the Republicans have to run against President Obama.

63 Responses to In This Corner…Mitt Romney