Greed is Good; the Bain of Mitt’s Campaign

One of the most classic lines in movie history from Oliver Stone‘s Wall Street was immortalized by Michael Douglas playing investment guru Gordon Gekko.

“Greed, for lack of a better word, is good”

Often just shortened to ‘Greed is good‘, it was from a scene where Gekko was addressing the employees and the board of a company he was taking over in order to break it up and scavenge its assets. In the movie, the character of Gekko isn’t portrayed so much as an uber-capaitalist as he is a predator; a vulture circling stressed companies like carrion over a dead cow carcass. It’s a characterization not unlike Mitt Romney’s during his tenure at Bain Capital. The only difference is that as far as anyone knows, Romney never engaged in insider trading practices.

The Gekko/Romney comparison is what the nation will be hearing more of in the coming days. It’s surprising that it hasn’t been emphasized more before now though Jon Stewart first labeled Romney as looking like “the guy who laid off your Dad” a few months back. But the comparison is about to be upped a notch in a thirty minute infomercial being released soon. It’s a fairly damning documentary. Watch the trailer below:

When Mitt Romney Came to Town

The video follows the fate of four companies that Bain Capital took over and documents the events that took place as Bain systematically dismantled the companies for a profit. It has interviews with the people who lost their homes and contrasts it with Romney’s multiple mansions. Possibly the worst example is Romney’s decision to raze a $12 million 3,000 square foot beachfront California home to replace it with an 11,000 square foot house.

The website promoting the video calls the process Bain Capital engaged in ‘creative destruction’ or ‘deindustrialization’.

“Mitt Romney was not a capitalist during his reign at Bain. He was a predatory corporate raider. His firm didn’t seek to create value. Romney looked for businesses he could pick apart. Indeed, he represented the worst possible kind of predator, operating within the law but well outside the bounds of what most real capitalists consider ethical.”

This will completely debunk the notion that Romney is a job creator but rather an opportunist who got wealthy at the expense of thousands of American workers. It will portray his homes built at the expense of the pensions of people who lost their homes and jobs. It may be the one thing that undermines the notion of an inevitable nomination of Mitt Romney for President. It will certainly do some damage not only to Romney but to Gingrich. 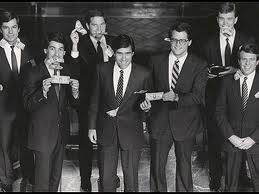 "we're in the money"

Ironically, like the attack ads that under cut Newt Gingrich’s lead in Iowa, this ad is produced by a Gingrich Super Pac; the organizations created as a by-product of the Citizens United decision. The ads will be shown courtesy of a $5 million dollar investment by a wealthy casino owner. Technically, Gingrich doesn’t have anything to do with the documentary since Super Pacs are required by law to be independent of political campaigns but the whole thing does resemble a political cat fight. Gingrich, of course, will claim not to have anything to do with it but everyone will know that this is retribution for Iowa and it will make him look petty and bitter. Its release will also follow the gaffe that Romney made yesterday where he said ‘I like firing people’. Expect to hear that soundbite repeatedly in the coming days (it’s actually now Rick Perry’s ringtone on his cell phone).

While the documentary is intended to push Romney from the top of the Republican ticket, the person most likely to benefit from it will be President Obama. Whichever person is left standing after the Republican nomination is likely to be so damaged from all of the negative Super Pac funded ads that the public may just decide that Obama wasn’t so bad after all.

Mr. Universe is a musician/songwriter and an ex-patriot of the south. He currently lives and teaches at a University in the Pacific Northwest. He is a long distance hiker who has hiked the Appalachian Trail and the Pacific Crest Trail. He is also an author and woodworker. An outspoken political voice, he takes a decidedly liberal stance in politics.
View all posts by Mr. Universe →
This entry was posted in Uncategorized and tagged Bain Capital, Gordon Gekko, Greed is good, Michael Douglas, Mitt Romney, Newt Gingrich, Oliver Stone, Wall Street. Bookmark the permalink.