The Big Man Moves On 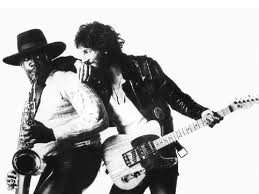 The Big Man and the Boss

Eloquently echoing pangs of pre-teen angst, Bruce Springsteen‘s Album ‘Born to Run‘ served as an anthem for many. Muscle cars, longing for that girl, and breaking free from mediocrity at high speed. Now the accompaniment of that era has moved on down Thunder Road. Saxaphonist for the E-Street Band Clarence Clemons passed away from complications of a stroke today. You will be missed, Big Man.

Mr. Universe is a musician/songwriter and an ex-patriot of the south. He currently lives and teaches at a University in the Pacific Northwest. He is a long distance hiker who has hiked the Appalachian Trail and the Pacific Crest Trail. He is also an author and woodworker. An outspoken political voice, he takes a decidedly liberal stance in politics.
View all posts by Mr. Universe →
This entry was posted in Uncategorized and tagged Big Man: Real Life & Tall Tales, Born to Run (song), BruceSpringsteen, ClarenceClemons, E Street Band, Thunder Road. Bookmark the permalink.

1 Response to The Big Man Moves On