(Ed. note: We occasionally accept guest op-eds at 538 Refugees. In this case, it is from one of our right-leaning commenters. In the interest of fostering bi-partisanship, we present an article from regular commenter parksie555. — Mr. Universe)

This is my first article on 538 Refugees, so go easy, lefties. It’s a little bit of a change of pace from discussion of Obama, budgets, and health care. The best way to describe it would be the “unintended consequences of government overreach.” 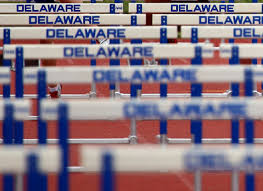 The story begins a few days ago when I opened my morning paper, the Wilmington News-Journal, and the lede in the sports section is about the University of Delaware dropping men’s track and field and men’s cross country, effective after this season. The News-Journal quotes athletic director Bernard Muir:

We explored every avenue in search of alternatives to this action. After weighing several possibilities, we concluded that this plan is our most viable. We found ourselves facing two options: Either we had to continue the periodic expansion of programming for women in order to be responsive to their interest and ability, or adjust the current offerings to provide equitable and substantially proportionate participation opportunities for our men and women. Continued expansion of our Athletics program is not feasible in this financial climate, and given that reality, the University made the only decision it could.

The article said that UD currently has a student body that is 58% female, and that in order to meet the proportionality guideline of the three prong test, these sports must be dropped.

Delaware's Graduating Class of a Century Ago

Delaware has competed in men’s track and field meets for a hundred years—literally. The first meet was in 1911. It has not been a glamorous program—just kids getting a chance to compete at the next level beyond high school. The program has always had outstanding student athletes—not majoring in such garbage as “Recreational Studies” like many in more renowned athletic programs. And the program has provided a large proportion of coaches for local high school and middle school teams; the News-Journal quotes a local coach who estimates that 25% of the high school track and cross country coaches in the state are alumni of the UD track and cross country programs. In short, the program clearly illustrates what college sports should be all about.

I don’t think that the cuts are for budgetary reasons; the entire cross country budget costs less than that for a single roster spot on the basketball team, according to the article. It is hard for me to imagine that these two sports are budget busters at a major state university.

So what went wrong here? Is it a legitimate role of the federal government to decide who should and shouldn’t get a chance to play college sports? Are the problems related to Title IX implementation and interpretation an issue that Congress needs to address, even with all the other issues our nation faces? Have the problems caused by Title IX now outweighed the benefits that Title IX has wrought?

I would argue that this is an excellent cautionary tale for those that feel more government regulation is a solution for many of society’s problems.

What say you, fellow Refugees?

Jim Parks is a process control engineer with a large chemical company. He is a lifetime Delawarean. A big baseball fan, board wargamer, and a bit of a military history buff, he considers himself politically an endangered species: an elephant in Delaware, philosophically aligned with the upstate faction of the party.